Chesterfield rally driver Rhys Yates ensured his return to the prestigious Monza Rally Show was a successful one, by taking a stunning top-ten position in an HK Racing Ford Fiesta WRC at the famous Monza Race Track near Milan in Italy (6-9 December).

Competing against some of the best motorsport stars in the world, including seven-time Moto GP World Champion Valentino Rossi and World Rally Championship ace Teemu Suninen, Yates returned to the invitation-only event for the second time in as many years.

With former World Rally Championship event winning co-driver Denis Giraudet reunited with Yates for the event, the pairing was aiming to beat their 2018 result where they took fourth place in the R5 category shootout. This year, Yates would return armed with a more powerful WRC specification machine with intentions of securing a top overall result this time around.

The 25-year-old has enjoyed a strong 2019 campaign behind the wheel of the Brettex Skoda Fabia R5, mixing a British Rally Championship campaign with selected FIA European Rally Championship and World Rally Championship outings. Events in Europe for the talented driver also reaped rewards, becoming the first Briton to win the Belgian based Rally Van Wervik at the start of the year.

Honoured to have been invited back to Monza to contest the event, Yates was in a buoyant mood after the pre-event practice which offers drivers the chance to acclimatise themselves to the unique layout around the circuit. Setting a time quicker than eventual event winner Rossi, Yates was looking forward to the following three days of competition.

Just two stages made up Friday’s opening leg and after the opening short blast Yates laid down his intentions for the remainder of the event to head into the overnight halt in 12th overall.

Saturday would be the main focus of the event with 73km on offer for the 120 drivers from across Europe. Contained in just four special tests, the final of which was a 44km blast around sections of the main circuit and perimeter roads.

Despite being in an older specification World Rally Car, Yates set a string of confidence boosting times during the day’s stages, ensuring he would break into the top ten by the end of the leg, mixing with some of Italy’s leading pilots on two and four wheels.

Never outside the top ten on stage times during Sunday’s final three tests, Yates was relentless in his conquest to better his result and a fourth fastest final stage time helped ensure he would finish an impressive ninth overall, eclipsing his 18th overall position in 2018.

“Yet again the Monza rally Show never fails to amaze me and what a great way to return to the event with a top-ten result,” said Yates.

“The crowds and atmosphere are sensational but the real honour is being able to compete alongside my childhood heroes like Valentino Rossi. It was pretty surreal heading through the Ascari turn on the circuit and looking in my rearview mirror to see Rossi and Antonio Cairoli chasing me down.

The Fiesta WRC was a great car and I`m glad we managed to get a test event in the schedule a few weeks ago to acclimatise to it. Its a very different beast to the Skoda but I loved driving it and although the technology has moved on quite some way in comparison to the 2017 WRC cars, I`m pleased with my performance this weekend. It’s been a real honour to compete here once again so huge thanks to HK Racing for the car and of course to Denis for stepping into the co-drivers seat again. It’s certainly been a weekend I really won’t forget in a hurry.” 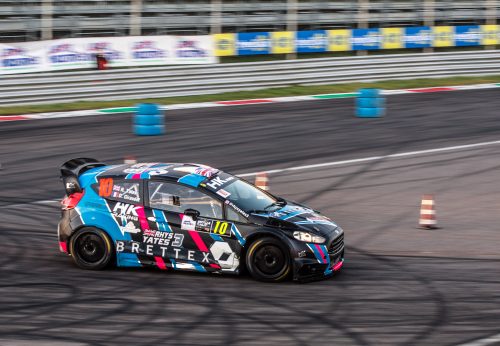