Rhys Yates was one of the first drivers to signal his intent to enter the MSA British Rally Championship in the latter part of 2015 after a season in the BTRDA series. Yates has showed impressive form in the opening three rounds taking his first BRC points on the iconic Circuit of Ireland. We caught up with Rhys as the series hits the mid-season break.

The Sheffield-based driver was previously a Motocross exponent and competed at a high level in the British youth series. With too many injuries and broken bones, Rhys’ family decided to put a cage and four walls around him and give rallying a go. He first stepped into a rally car towards the back end of 2013, campaigning a Suzuki Swift on the Cambrian Rally. In 2015, the young gun fully committed to rallying, leaving two-wheels behind him after acquiring a Ford Fiesta R2. After a year-long battle, Yates took the MSA English Championship in his first full season in a rally car.

At the end of his Championship-winning year, Yates and his team took the plunge and stepped up to the R5 category with the full intention of taking on Britain’s premier rallying series.

“We were deliberating over staying with the R2 or stepping up to R5 machinery,” said Yates. “ We heard good things about the BRC with everyone campaigning similar spec cars in the top category. To have the likes of [Fredrik] Ahlin and [Elfyn]Evans, who are top WRC2 drivers, really gives the championship a lot of credibility and to compare times against them really spurs me on.”

“We didn’t know what to expect when we went into the Mid Wales Stages. Nobody knew where they were going to fit in the order. It was a lot of firsts for me as it was the first time making my own notes, first time competing on long stages and first time in the dark!

“We had a puncture on the first stage which set us back but we knew Mid Wales was all about gaining experience and learning how it all works. We set some good times on the next two but on stage four it all went Pete Tong! We slid into a ditch and couldn’t get it out. Game over. It was such a shame.”

Putting the disappointment behind him, Yates and his team headed across the Irish Sea to face the daunting Circuit of Ireland with limited Tarmac experience in his Ford Fiesta R5, having only competed on the Rockingham Stages five months previously.

“ It was another step going to Ireland. First event on closed roads and first proper event on Tarmac. We were slightly off the pace on the first day but I just wanted to get the miles, especially when everyone was dropping out. Having got through all of that we pushed on the final day and set some good times. The one thing that got me was that the crests and rises in the recce were actually flat out jumps in the rally car, which was just something else! It was special to score points on such a historic rally and it really gave me the confidence, especially after Mid Wales.”

With everything clicking after the two-day Tarmac classic, Yates and Woodburn returned to the gravel for round three of the revitalised series.

“The Pirelli was a disappointment as it just didn’t click for us,” Yates said. “If you told us we would have finished 11th on our third BRC event at the start of the year we’d have taken it but it shows how far we have come. I had no confidence in the car and we hadn’t been in it in gravel spec since mid Wales so we weren’t committed enough through the fast corners. They were the quickest stages I have ever driven and it took time to get up to speed. We are running without the Evo upgrade and could feel the deficit on the quick stuff. I was just happy to get to the end but yet gutted to have missed out on a point.”

The Michelin-runner has shown his speed and pedigree despite his relative lack of rallying experience. However, the Derbyshire driver says he is in the series for the long haul as he sets foundations for the future.

“This year is a year of building for us as we have to learn the events, the car and how it all works so we can push on and have a good go and challenge for the podium in the future. To be a part of the BRC is awesome. The coverage is great and the cars are unbelievable to drive. We have a damper and Evo upgrade coming ahead of the next round and will do some testing before the Scottish. We are a family run team and do most of the work at home. We enjoy the weekends and we always look forward to the next event. Bring on the Scottish!” 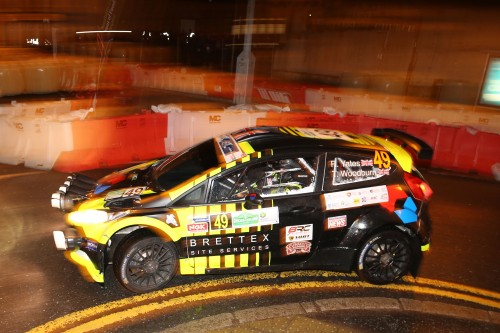