The Ford Fiesta R5 driver recorded his best-ever BRC finish on the two-day, multi-surface event showing a sizeable step forward in pace on the Welsh round. Yates and co-driver Alex Lee nestled themselves into a solid sixth overall after the opening dust-filled stages and looked to make progress on the silky smooth Epynt Ranges the following day.

Passing a struggling Jamie Anderson on the leaderboard on the opening test, the Derbyshire driver was set to record another fifth overall and equal his best finish, but drama was to unfold in front of him. On Stage 12, both Osian Pryce and Keith Cronin retired from the event allowing Yates and Lee through into podium contention.

It may have looked simple on paper – a hard-charging Marty McCormack was reeling in the young-gun at a rate of knots. The asphalt-ace eyed a podium but Yates was not going to allow his first podium slip away and the Chesterfield-based star upped his pace to fend off McCormack and deliver his best performance in Britain’s premier rallying series.

“It was really good to get third,” enthused Yates. “That was the goal at the start of the year and we have ticked that box with events to spare, which is brilliant. After Ypres it was good to bounce back and the Nicky Grist was near perfect for us. To have Alex [Lee] joining me for the first time was good and we clicked straight away and the only fault on the car was the ECU cooking and getting to hot!

“Marty [McCormack] was on a mission as he was catching us, but the end-of-event fight was a real confidence boost as rather than bringing the car home we had to push to keep our position and to do it against one of the best was very pleasing.”

Yates is gathering momentum and in his second season in the BRC has strung a strong campaign together. His recent third place and season long haul of points sees him sit in fifth in the overall standings.

“I said at the start of the year, top five on gravel and fighting for podiums on Tarmac is where we wanted to be and to be there already is good progress for us. Fifth on the Borders straight out of the box set us up nicely and we have bagged some good points since. To be only eight points behind third in the standings means that everything is to play for with two events to go.”

Looking ahead to the Ulster Rally and Rhys will be reunited with his regular co-driver and hopes to build upon his Nicky Grist good fortune to challenge for further podiums before the season is out.

“Going to Ireland was a real eye-opener last year and the Circuit of Ireland was good practice for the Ulster in some ways but the two events are completely different. The Ulster stages are a lot more narrow, muddy and slippery which made it a long tough event. I enjoyed it last year and with the experience this year I think we can mount a bigger challenge for the five or even better.

“I am not thinking too much about the championship as I am focusing on the events but if you keep getting podiums and strong results the championship standings will take care of themself. It’s nice to be in the thick of the battle and it’s going to make the final round very interesting!”

Rhys will be back in action on the 18/19 August for the two-day Tarmac Ulster Rally. 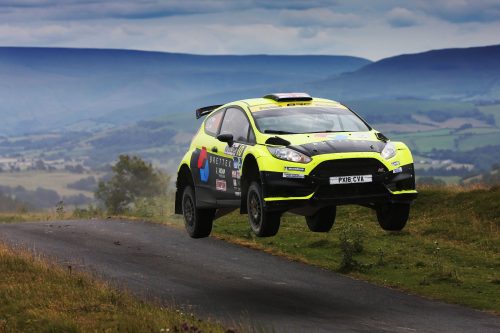