Yates excels in extremes throughout Europe

Prestone MSA British Rally Championship front-runner Rhys Yates has recently returned from a stellar performance in the south of France in his latest European adventure. Before that, the Englishman finished eighth overall and a fine third in the Under 28 category on the opening round of the European Rally Championship (ERC) in his recently acquired Skoda Fabia R5.

Yates has been a BRC regular over the past two seasons and chalked up a breakthrough podium on the Nicky Grist Stages last season in the Ford Fiesta R5 on his way to fourth in the standings. This year, Rhys has swapped to a Fabia R5 and has already beaten his previous best by scoring second on the Pirelli International Rally and and believes this will help him push on to greater things in 2018.

“The Skoda is an attractive car and gets the results, “explained Yates. “We had the Fiesta for two seasons and we were thinking of a change to try something else and we thought ahead of the BRC and ERC and other events it made sense to do it now.

“It is completely different. First of all you sit closer to the front of the car but the characteristics are also different. The shorter wheelbase allows it to turn in quicker but it also brings oversteer. The power is more progressive and I think that is helping my smooth, consistent style.”

With a new mount, the 25-year-old was hungry to make his European Championship debut to try the Czech machine and compare himself with some of the best upcoming drivers in the world.

“The ERC is always something I wanted to try and we had planned to go to Rome in July. When the first round of the BRC was called off we had to do the opportunity to do the Azores and had literally one day to get the entry in and sorted. Fredrik [Ahlin] is doing the series and I spoke to Martin Wilkinson at CA1 Sport and the opportunity to join them made sense.

“It was a great weekend to gather so much knowledge. To have three days of seat time definitely helped and the event through up all conditions. To run first on the road and further down the order was good to experience.

“I didn’t really have any aims going into the weekend. I know how far off I was per kilometre from Fredrik last year and he wants to win the championship this year so to come down to about half-a-second is really pleasing and for someone to tell me I would be in the top 10, and third in class, I would have bitten your hand off.”

The Azores event was certainly an eye-opener for the Derbyshire driver and asked to describe the stages, Yates tried his best to sum up the island roads.

“I have never driven an event like it. The closest thing I could describe it to is the Ulster Rally with its tight, narrow bumpy roads but on gravel with higher banks either side –really unique, technical stages crossing over the top of volcanos, it was certainly an eye opener.”

The tough and demanding route pushed the English driver to the maximum, with the Skoda driver excelling in the extreme conditions with championship sponsor Prestone supporting the Chesterfield driver.

“The event was really tough and we used the Prestone products onboard the Fabia after a successful year in the BRC with the Fiesta. When going through water splashes, clouds on the top of volcano’s visibility is even more important and the Prestone screenwash is that extra little bit better and cleaned the screen really quickly allowing me to properly fully focus on the job in hand.”

Head of Marketing for Prestone, Claire Fenton said; “ We have been closely following Rhys’ progress since we came on board as headline sponsor last year. Rhys is an exceptional young driver with a really exciting season ahead of him.

“We are honoured to have provided Rhys with first fill of Prestone Coolant/antifreeze and Screenwash this year, ensuring his car is in peak condition for excelling at every stage across the season. We wish him the best of luck for the season!”

With the Azores trip ticked off the rallying bucket list, the Brettex driver now focuses on the British Rally Championship and reflects upon his past two seasons.

“After the Azores my expectations have changed for the year ahead. I think gelling with the car has helped but also the knowledge from CA1 Sport has helped us progress no end with set-up and advice.

“Doing the BRC was a massive step for me. Without doing the series, no way could I have gone to do WRC or ERC events. It’s a different type of weekend. It is less intense than the WRC but it is all crammed into a shorter, compressed time frame which means you put in no less effort. I really believe the preparation I learnt in the BRC like pacenote making and recce is now second nature for bigger events and has provided me with a stepping stone to the WRC and has allowed me to be competitive in events that I never thought would be possible to do.” 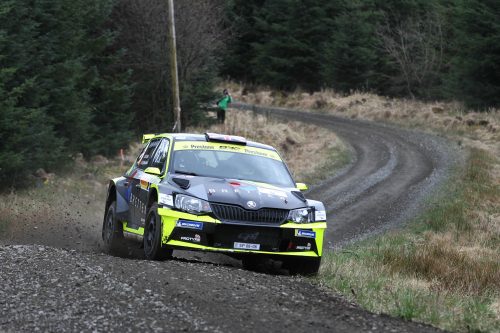