After recently acquiring a brand new Skoda Fabia R5 from Skoda Motorsport, Chesterfield rally driver Rhys Yates will embark on a busy season as he announces his plans for  British, European and World Rally Championship outings in 2018.

The 25-year-old driver had a successful season behind the wheel of an M-Sport Ford Fiesta R5 in 2017, finishing fourth overall in the Prestone MSA British Rally Championship (BRC) and enjoyed outings in Spain, Wales Rally GB and the invite-only Monza Rally Show. Yates will now kick off his packed year with a pre-season test in Sweden to get acclimatised to his new surroundings this weekend (10th/11thFebruary).
After using the Malcolm Wilson Rally as a warm-up, his season will formally start with the opening round of the British Championship, the Border Counties Rally in March which takes place in the forests of the South of Scotland and Kielder.  For the season opener, Yates will be run by the Cumbrian team CA1 Sport.

“Throughout my rallying career and even when I was contesting the British Moto X championship, I have always wanted to be as progressive as possible and learn as I go, so I really wanted to take everything one step at a time,” says Yates.

“We did things the right way by starting in a Suzuki Swift, then an R2 Fiesta before moving up to four-wheel-drive but I feel the time is right to chase down a title and I think the British Championship could be in reach this year. We have the right car, right team and Alex (Lee) is back in the co-drivers seat this season so I will have the confidence to push, where perhaps I was cautious last year. It will be interesting to see what the pace is like on the Border Counties”.

Yates will also look to expand his outings on European events after a successful run in Rally Spain and the Monza Rally Sprint in 2017.

“Being abroad in high profile, overseas events was great last season I really want to head back out there and see what we can do.  We will do Wales Rally GB again as its part of the British Championship this season and Spain was one of the best events I’ve done so we will be going back there. But I want to try some ERC rounds too as the R5 competition it mega on those events so it will give us a great benchmark to measure against during the year.” 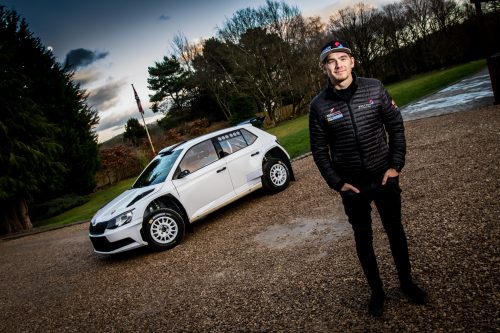