The second round of the FIA World Rally Championship was to be a successful affair for our current and previous BRC stars.

2016 BRC Champion Elfyn Evans recorded his second WRC win in fine style as he and co-driver Scott Martin became the first all British crew to win the winter classic. The Toyota team scored a podium in Monte Carlo and with both results combined now sit at the top of the standings.

From the vastly experienced Welshman to our WRC rookie, Ruairi Bell. Bell and co-driver Darren Garrod won the Ford Fiesta Trophy last season, and with it 60,000 euro to put towards a Junior WRC campaign. On his first go in the tricky conditions the young Englishman kept his head and finished seventh in the Junior category, putting points on board early in the season.

Torstein Eriksen who navigated for Fredrik Ahlin in the BRC has had an ultra-successful start to his 2020 season alongside Mads Ostberg. The Citroen Racing pairing took the WRC2 spoils for the second event in a row while BRC Wildcard Jari Huttunan who finished third on the Pirelli Rally last season claimed the top R5 spot and with it tenth overall and top WRC3 driver. Dan Barritt helped Japanese driver Takamoto Katsuta keep on the straight and narrow for ninth in the fourth factory Toyota Yaris, while Patrik Barth stepped into a Skoda Fabia R5 with Pontus Tidemand as they finished a creditable 15th overall.

Rhys Yates and James Morgan after their fine third on the Cambrian Rally continued the good run on the snow, ice and gravel of Sweden to take fifth in WRC2 for M-Sport.

Craig Breen returned to WRC action with Hyundai and finished a very credible sixth overall to help keep Hyundai at the top of the Manufacturers table, as 2016 National Rally Cup winner Robert Blomberg finished in 23rd overall – continuing to get to grips with his new Skoda Fabia R5. Top co-driver Aaron Johnston was contesting his first Rally Sweden alongside Oliver Solberg and the duo can be pleased with their fifth overall in WRC3.

Former JBRC competitors Oscar Solberg and Jim Hjerpe had a disappointing event and could only secure 13th in the JWRC while Jon Armstrong and Noel O’Sullivan suffered a sizeable off on the opening day. Both were okay after the incident and will look to bounce back next time out.

Elsewhere Jari-Matti Latvala had an event to forget in his private Toyota Yaris WRC. Mechanical problems saw him into retirement on the first day, however fans of the flying Finn will be able to see him in action in Sardinia in June.

While all of the above happened,  Iain Campbell kept himself indoors in the warm as the BRC Championship Manager put on his FIA Steward hat for the weekend. 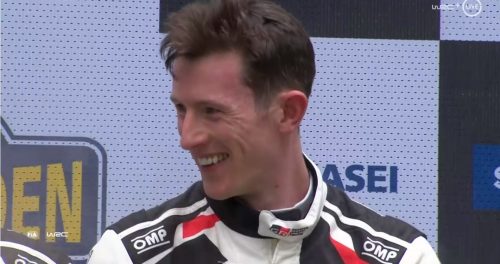