Fresh from a seventh place finish at round nine of the World Rally Championship in Finland, Craig Breen and Paul Nagle turn their attention to matters closer to home this weekend.

The two men are the top seeds for Saturday’s Today’s Ulster Rally, the penultimate round of the Irish Tarmac Championship. They currently head the standings courtesy of four victories from five rounds, with a win on the Ulster guaranteed to hand them the Irish Tarmac crown.

Breen – who last made an appearance at the Northern Ireland Motor Club event in 2012 with Nagle when they performed safety car duties in Peugeot Sport’s new 208 R2 rally car –is making the surprise switch from a Ford Fiesta R5 to a Hyundai i20 R5 for the Ulster Rally.

Running behind Breen is last year’s Ulster Rally winner, Matt Edwards (Ford Fiesta R5). The Welshman is also the defending British Rally champion and jointly leads that series with fifth seed Tom Cave (Hyundai i20 R5). The pair make the trip across the Irish Sea tied on points and know how decisive a perfect score on the Ulster could prove in their bid for silverware.

Separating the two visitors on the road is Alastair Fisher – the nephew of Bertie Fisher – and Callum Devine, two drivers who also have experience of competing at the sport’s top level. Josh Moffett – the reigning Irish Tarmac champion – starts at six ahead of his older brother Sam. Desi Henry, Jonny Greer and Marty McCormack start at eight, nine and 10 respectively.

Saturday’s rally comprises three special stages, repeated three times, with the first going live at 8.30am. In-between each loop of stages, Banbridge will host three regroups at Solitude Park car park. During these, fans and families will get the chance to meet various drivers and see their favourite cars at close quarters.

The ceremonial start takes place in Newry on Friday at the Albert Basin from 8.45pm with the grounds of Newry High School the backdrop for the finish ramp celebrations on Saturday afternoon (5.30pm). A free spectator programme containing stage maps and a full entry list will be available to download from the Today’s Ulster Rally website (www.ulsterrally.com) and the event’s official Facebook page from early this week.

Ulster Rally Event Director, Richard Swanston, said: “We are absolutely delighted to have attracted such a strong line-up of leading drivers for the Today’s Ulster Rally. There is real strength and depth in the top ten which makes picking a winner incredibly difficult. Each and every single one of them has a chance as the crews and cars are all so evenly matched.” 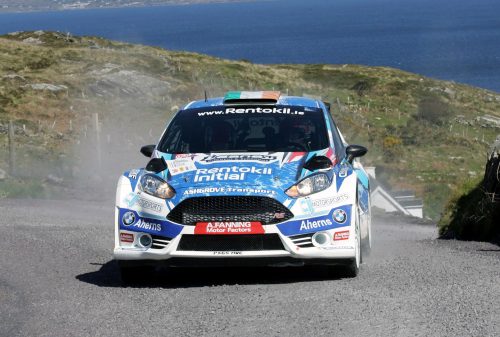