The 32-year-old will step into a Ford Fiesta R2T for the new season as the Red Bull athlete registers for BRC4. Atherton entered several rounds of the BRC last year but was not registered for the series. Gee and co-driver Keaton Williams were bitten by the BRC bug and have registered for Britain’s premier rallying series in 2017.

“Last year was a bit of a toe-in-the-water exercise to see how I faired against some of the established names in rallying,” explained Atherton. “The events I did, I loved every minute and I was impressed with the series and the events.”

Gee learnt his trade in a 1.6 litre naturally-aspirated Ford Fiesta R2, chalking up some impressive results in his first season of four-wheeled competition – with one of the highlights being a class win on the Wales Rally GB National Rally last year. A close-season switch to a R2T Fiesta is an exciting one for the downhill star.

“I have stepped up to the Ford Fiesta R2T and it’s a great bit of kit. I have done a few tests in the car, but not as much as I would have liked. There are a few things I had to get used to, like the turbo and left-hand-drive for example. I think I will only feel comfortable when we get into an event proper as you can never truly experience proper conditions in testing.”

Atherton, a Mountain Biking World Champion and World Cup winner is a master of two-wheeled discipline and believes that it has stood him in good stead for the switch to four wheels and a roof over his head.

“Having the two-wheeled experience definitely helped learning a new sport from zero. After 10 years at the highest level of mountain biking there are so many skills that can be transferred into rallying. Judging speed, keeping the car balanced, working on set-up, reading areas of traction and walking that fine line between aggression and caution. But then there are some areas of the sport that are very fresh to me.”

Gee is used to riding solo – man, machine and the elements. The biggest challenge for the north Wales-based driver is opening his ears and listening to a co-driver’s voice alongside him.

“The toughest part of the switch was listening to someone else. Normally I get into the zone early and block everything out 100 per cent but in rallying that isn’t possible as the co-driver is key. Keaton [Williams] is fantastic. Really young and really good co-driver but with a lot of experience and that is vital as I continue to learn.”

A mid-season crash during the 2016 World Cup in Andorra sidelined Atherton from competitive action. To help get Gee back to full fitness, rallying called for the Salisbury-born rider.

“Being away from the bike was tough and when I couldn’t get on the bike, rallying was one of the first things I did. It kept me match-fit and sharp and that fine-line balance had to kept up, so when I did get back on the bike, it didn’t take too long to get back up to speed.”

Like many, work has to come first and Gee has to juggle his rallying exploits with his mountain biking commitments. The BRC provides plenty of challenges and GeeMan is keen to improve and mix it with the best in the BRC.

“My plan this year is to do as many rounds as possible. Mountain biking has to take top priority but when there is time I will do more as I love every minute of being in the car. I am looking forward to the fresh new challenges but also to going back to rounds I have been to before as I will feel more at home. It would be good to compare myself to last year on stage times, too.”

The most important thing for me is progression. I am enjoying the whole experience and enjoying the learning curve.

“I think the BRC is incredible, being on those events last year and seeing the passion and how much people care about the series is incredible. To have top class drivers not only from the UK but also from overseas is fantastic. It’s a big deal and will only get bigger and I look forward to being a part of it this year.” 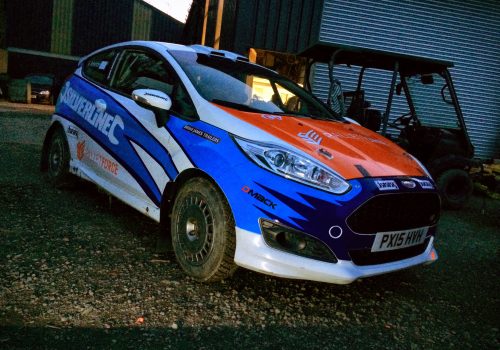