Irishman James Wilson won his first Junior BRC event after an explosive battle in the front-wheel-drive R2 category. The Peugeot 208 R2 driver kept his head down and minimised the mistakes and under the watchful eye of 2014 BRC co-driver champion Arthur Kierans, the pair took to the Ceremonial Finish and scooped £2,500 from Peugeot UK and Total.

“What a crazy rally. I honestly didn’t expect to be there fighting at the very front. It was an unbelievable day and very hard work. That’s the way we want it, tight and close and makes it interesting for everybody.

“It wasn’t easy, I expected a fight back from William as he is a very fast driver and he put on a fair charge and hats off to him but we are over the moon with our first win.”

The Michelin-shod Peugeot 208s dominated the proceedings and locked out the JBRC podium. William Creighton and Liam Regan suffered a puncture on stage five but undertook a monumental fight back to clinch second in their 208 R2 to get their season off to a flyer. Marty Gallagher and Dean O’Sullivan had a year of torrid luck in 2018 but bounced back on the season opener to round out the top three in another 208 R2.

Josh McErlean and Ger Conwy (Peugeot 208 R2) had been fighting with Wilson at the sharp end all day but a night stage puncture denied him his first win. A solid fourth however will stand him in good stead before the tarmac of West Cork next time out.

Jordan Hone was undertaking his first BRC round in the ex Callum Devine title winning Opel ADAM R2. Hone along with Aileen Kelly set some very impressive times and rounded out the top five. As we head to tarmac, Hone will not want to be discounted from the fight.

Finlay Retson wheeled out one of the brand new 2019 Ford Fiesta R2s direct from M-Sport Poland. Retson showed the potential straight away, setting the fourth fastest time on the first stage. However an excursion made the new Fiesta slightly second hand, but Finlay’s never say never attitude rewarding he and co-driver Tom Hynd with sixth overall and top spot in the Fiesta Trophy.

Series newcomer Ruairi Bell along with 2018 BRC champion co-driver Darren Garrod were the first EDSL Sport driver home in seventh in another new Fiesta while Bart Lang and Sinclair Young in the Myerscough College Fiesta R2T was the final finisher in seventh.

Junior BRC runner-up last season James Williams was one of the favourites for victory on the Cambrian. Turbo pipe issues on the opening stage dropped James along with navigator Tom Woodburn down the order and on stage three a mechanical failure put them out of the event.

Reigning Cadet Cup champions Jordan Reynolds and Peredur Davies were also in a brand-new Ford Fiesta unfortunately retired on the final road section while they were the leading Ford. They can take a lot from the weekend as their pace put them right in the mix for a good haul of points.

Scott and David Sloan enjoyed their BRC bow in their Peugeot 208 R2 but gearbox gremlins denied them JBRC points while Nabila Tejpar and 2018 Cambrian Rally winning co-driver Max Freeman rolled their 208 R2 out of ninth place on the final stage.

In other news, John Morrison and Peter Carstairs suffered differential problems early on but nursed the Kumho Mitsubishi Evo 9 to the National Rally Cup honours. 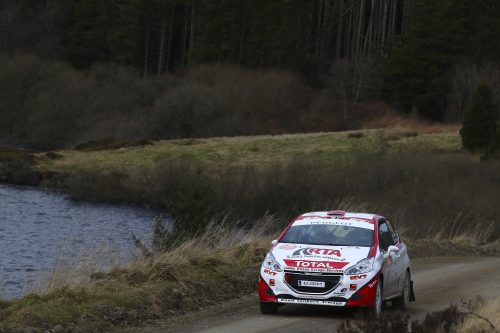