Wilson steps up to BRC top-flight in 2021

Former Junior British Rally Championship front-runner James Wilson will make his return to Britain’s premier rallying series for a full assault on the championship, but this time behind the wheel of a Road Tanker Armagh backed Hyundai i20 R5.

Wilson tackled the hotly contested Junior category in a Peugeot 208 R2 in both 2018 and 2019, winning the season-opening Cambrian Rally in 2019 before his title hopes slipped away. He would return to the series armed with R5 machinery on the Ulster and Galloway Hills rallies, taking an impressive fourth overall in Scotland.

Now, the Motorsport Ireland Rally Academy member will make a BRC comeback in a PCRS Rallysport Hyundai and go head to head with one of the best quality entries seen in the series for many years. Co-driven by the experienced Arthur Kierans, Wilson has realistic expectations this season.

“I really want to get the fun back this season, after being out of the driving seat for so long it will feel like we are starting up again so I`ll be looking to take small steps,” he says.

“I guess I don’t have any expectations as I`m still learning the car. COVID meant that we haven’t been out since March last year and that was on gravel, so starting the season on asphalt [at Oulton Park] will be tricky.”

“We will have to see what happens on round one and go from there. We need to do what we need to and get through the weekend but I`ll certainly feel more at home when we get to the Nicky Grist Stages. I`ll be cross each bridge as we come to it this year for sure”. 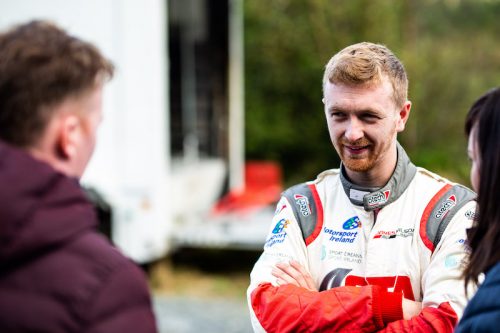