James Wilson will enter the ultra-competitive Prestone MSA British Rally Championship in a Peugeot 208 R2 in 2018.

The 23-year-old is latest registration into the Junior BRC and the Irishman is set to campaign the 208 R2 in Britain’s premier rallying series. With the seven round series ahead – James has all the credentials to succeed in the fast and furious two-wheel-drive formula.

“We wanted to step into a R2 car a few years ago and the BRC was the focus,” explained Wilson. “We won the Irish R2 category last season which was unexpected and as soon as we won that, we wanted to get our plans together as soon as we could for the BRC.

“Last year we got off to a slow start, but by Donegal we changed the set-up and it changed completely as we were fighting where we should have been and set some reasonable times – right in the mix. On the Ulster Rally we really put ourselves into the championship and it was extra special to compare our pace with the BRC regulars. That boosted our confidence to be able to step-up into the British Championship.”

After several years on the sealed surface in Ireland, the 208 driver is relishing the chance to get back onto the loose as he campaigns the French pocket-rocket on every surface possible.

“Three years ago we did a few events in the forest in a 106 Cup car but we wrecked the car which didn’t help out confidence. We did the first round of the Irish Forestry series and we won the class. With that result we are going to dovetail the series with the BRC. The next round is the weekend before the Borders so we want to gain more experience but we must behave ourselves!”

And his hopes for 2018? Wilson is optimistic but appreciated the scale of his latest challenge.

“We would really like to put on a early challenge but we have to be realistic. Guys like Marty [Gallagher] and Will [Creighton] have a whole year on us in terms of knowledge but we have to look at it as a two-year plan. Some solid points to begin with on the gravel would be brilliant. I am looking forward to British gravel as it will be completely different and learning how to carry speed on the fast and flowing stages will really help me build my rallying skillset. By the end of the year we would like to challenge for a podium or even a win somewhere.” 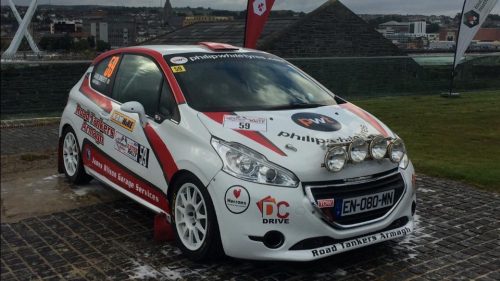