2018 Billy Coleman Award winner James Wilson is gearing up for an action-packed season in the Junior BRC. Wilson will be partnered by former BRC champion co-driver Arthur Kierans in the rapid Peugeot 208 R2 for the upcoming season.

James Wilson surprised many in the British Rally Championship last season – as he took the fight to the experienced front-runners in the ultra-competitive front-wheel-drive R2 category.

“The fact that last year we did a part campaign last season gave us the bug to come back for more. The chance to now do a year in Britain’s premier rallying series is one you can’t turn down and the chance to fight for the Junior BRC title is pretty special.

“I was very surprised when we tackled the Pirelli Rally – our pace was at a higher level than we anticipated as I had little to no running on gravel at all, so a fourth was a fantastic result for our first ever BRC round. Then Ypres was just incredible, the step-up for us to do that event was quite big and to take home third was huge and showed we can be up there fighting for podiums.”

Despite having to retire early from his home event – the Ulster Rally, Wilson had impressed many last season. Shortly after the BRC season came to a close, James was shortlisted for the Billy Coleman Award – the title he would later win just before Christmas.

“To win the Billy Coleman Award is unbelievable – it is so hard to describe my feelings towards it. To have your name on the award alongside the likes of Craig Breen and Keith Cronin is a massive honour. To win the Billy Coleman Award is something all Irish drivers want to win and the first highlight was the development day earlier this month where I got to sample an R5 car.”

Wilson along with the other nominees were invited to a training and development day where they learnt from some of the very best in the business. So many of us will never get to drive an R5 car, how was it for the Irish young-gun?

“It was surprisingly easy to drive! You can see why it is a natural step for drivers. I am not getting too ahead of myself as I am focusing on the Peugeot – a car you really have to work hard to get the most out of. The Hyundai had so much power and traction everywhere and it was pleasure to drive. A real carrot for the future, that is for sure.”

With James’ feet firmly on the ground, attention is firmly fixed on the season ahead and the changes inside and outside the car for the driver from Armagh.

“This year I have made a few changes. I have Arthur Kierans in the co-drivers seat and to have a former champion in the car is a massive asset. His experience will help me move forward as we use different approaches to pacenotes. We have also got Phillip Case and PCRS Rallysport to run the car for us, which will also massively help. Last year I ran the car with friends and local enthusiasts and now with work demands growing for us all it was natural to seek a more professional approach in running car. With car preparation taken away from me it means I can work on fitness and other areas so I can be a complete package and give 2019 a good go.”

And as for goals, Wilson wants to pick up from where he left off in 2018.

“Podiums are a definite target for this year for sure and I think win could be possible at some point – but there will be real stiff competition. There are going to be fireworks as there are some very talented Juniors once again and we all can’t win!” 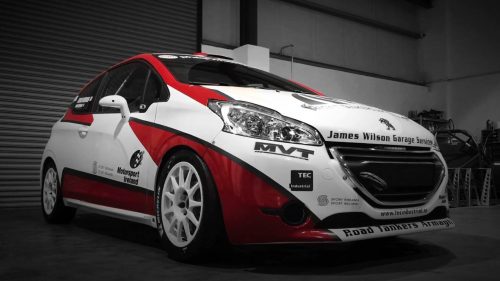