Matthew Wilson will make a thrilling return to the British Rally Championship in 2021, driving an M-Sport Ford Fiesta Rally2.

As M-Sport Chief Test Driver, Director and former World Rally Championship ace, Wilson is arguably one of the most experienced drivers in the country and will make his first appearance in the BRC since a one-off outing in 2016 and bolsters the M-Sport squad with co-driver Stuart Loudon.

Wilson will kick start his BRC campaign at this weekend’s Nicky Grist Stages and will head to the Builth Wells based event fresh from an impressive performance at the M-Sport Stages, taking the firm’s all-new Fiesta Rally3 to sixth overall, running inside the top-three for most of the event.

“I had a great weekend at the M-Sport Stages showcasing the new Ford Fiesta Rally3 and I’m very much looking forward to competing in the Rally2 at the Nicky Grist Stages in this year’s British Rally Championship” says Matthew.

“It will be my first BRC Rally since the Pirelli Rally back in 2016 and I’m looking forward to getting back on to these iconic Welsh stages. The Nicky Grist Stages has a somewhat sentimental value, due to my dad [Malcolm Wilson] claiming victory in the Metro 6R4 in 1985, and me taking my first overall victory back in 2004 when it was the Quinton Stages Rally.”

As well as the M-Sport name being synonymous with British and World rallying, Managing Director Malcom Wilson OBE has also stamped his mark on the prestigious British Rally Championship trophy.

“M-Sport has always had a rich involvement with the British Rally Championship over the years, a championship close to my heart having won it outright in 1994” said Malcolm.

“In 2017 we entered an M-Sport team for the first time and took the title, 2021 sees us once again enter a team, we had a strong start on the opening round with good results from Rhys [Yates] and Seb [Perez].”

“We thought Matthew would be a great addition to our selection of drivers eligible to score points on this event and give us the maximum chance of another great result. The Nicky Grist Stages, which was known as the Nicolet Stages when I was competing, is a rally that I for one very much enjoyed back in 1985, claiming victory in the Metro 6R4. It holds a lot of memories for me personally and I look forward to watching the results come in, from what is an incredibly strong field of entries.” 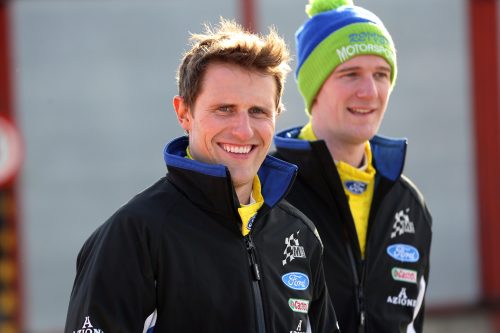