James Williams has previously contested BTRDA events in Ford KA and drove a Vauxhall ADAM Cup in the National category on the Isle of Man in 2016. The 19-year-old is excited to be embarking on his BRC journey and hopes to challenge for good results with the experienced Phil Hall calling the notes.

“This is a very big year for me,” explained Williams. “I realise that I might not have the experience of some of the drivers I’ll be up against, but I’m extremely positive and have aspirational targets. I’ve been working hard during the winter, not only on my driving, but my fitness as well – both physical and mental. I have to admit, I can’t wait to get started!”

James will be driving team-mate Osian Pryce’s actual Drive DMACK winning Fiesta that has since been refurbished by M-Sport in readiness for 2017.

Following a successful year for Spencer Sport, when it finished second in 2016 in its first ever season in the British Rally Championship, the bar has been set high. However, with the line-up it has this year the team is confident it can continue to run at the front of the field and mount an attack on both the overall and Junior titles:

“Having a year in the BRC under out belts, we start this season with all that experience behind us”, explains team principal Charlie Jukes.

“We achieved a 100% finishing record with our R5 Fiesta last year, so if we can maintain that level of consistency and reliability this season, with the drivers and co-drivers we have, I believe we have an excellent chance of scoring podium results in both classes on each round and at the end of the season. 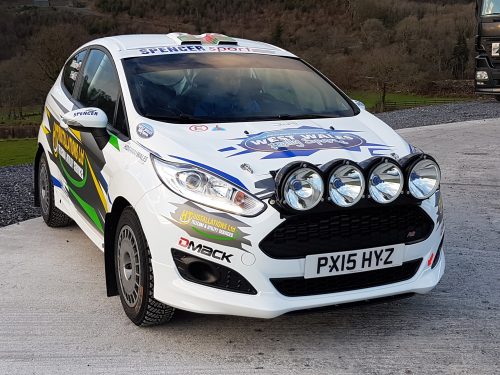