Williams first made his foray into the BRC last season at the wheel of a Ford Fiesta R2T prepared by Spencer Sport. After a difficult opening portion of the season, the 22-year-old had a steady rise in performance in the thick of the competitive Junior BRC series.

“We had a good year last year and we learnt a heck of a lot. The BRC was the right step for us to do and I feel with a year under the belt we can make even more progress this year up the ladder. We want to be fighting for wins and ultimately the title this season.

“We started from a fresh in 2017. We hadn’t done a lot of rallies, maybe eight in two years in the 1400 BTRDA category. Last year, we didn’t start off too well –we made some silly mistakes but by Ypres we got it all together and to take two podiums in our first season was very satisfying.”

The ADAM which Williams will use to tackle the Pirelli International Rally this weekend has an enviable reputation in the British front-wheel-drive category with Rob Duggan claiming the title in 2016 and more recently Callum Devine last season, and Williams believes he has the perfect package in place for the year ahead.

“The ADAM is a great car and we have driven it on a few events – it is amazing to drive. It’s hard to compare it to the Fiesta as they are two completely different cars but the Vauxhall is the superior car for Tarmac.

“We had a good run on the Cambrian Rally earlier in the year. Yes we had a few punctures but otherwise we were trading times with [William] Creighton who is a proven class front-runner so to match up with him bodes well for the rest of the year.”

Williams is his own tough taskmaster and has clear goals ahead of the upcoming campaign in the Prestone MSA Motorsport News Junior BRC.

“I think I was attacking too much last season where now I realise you don’t have to win every round as Callum [Devine] proved that last year. I want to keep the head and pick up solid results every time and maybe sneak that first win somewhere to build a strong championship challenge.”

Series sponsor Network Q is also backing the young Welshman for the season ahead and looks forward to taking the ADAM to the Belgian roads.

“I can’t wait to get going, and all the rounds look brilliant but if I had to pick the stand out, it would be Ypres. It had such an amazing atmosphere in the city centre and we took our first podium there which was extra special. I am looking forward to returning to the stages with Network Q onboard for the new season.” 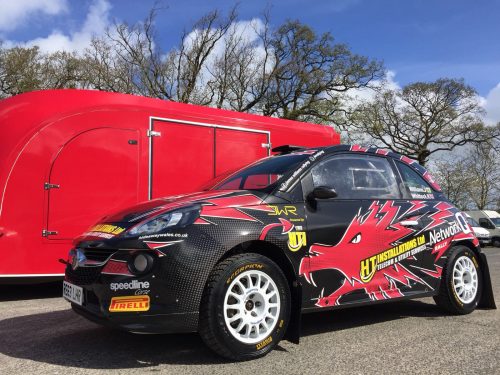