Williams and Hyundai ready to challenge in the British Rally Championship

The 23-year-old will be joined by the experienced Dai Roberts in the co-drivers seat, as the all-Welsh pairing will harness the Hyundai i20 R5 rally car, as they aim to fight at the sharp end in Britain’s premier rallying series.

Williams is no stranger to the BRC, as the driver from Newcastle Emlyn has competed in the Junior feeder series previously – notching up three wins and a further six podiums in the feeder series. The Welshman did score a strong fifth overall on his four-wheel-drive debut on the Cambrian Rally in 2020, before the BRC season was truncated due to the pandemic. Since then, Williams has had to bide his time to put together an assault for honours in the top class of the British Rally Championship.

Having contested selected national events on both asphalt and gravel already this year, James is ready to step into the British Championship ring and fight on stage one of the first event at Clacton next weekend.

“To say I cannot wait to get going is a massive understatement,” enthused Williams. “Sat on the side-lines has only built-up my hunger to get back to the championship, show my pace and fight at the sharp end. The level of competition in the BRC is always extremely high and this year, we could see a new name on that famous trophy – and I would like to be in the mix for that that this season.

“The car and four-wheel-drive as a whole is still fairly new to me, but I don’t see it as too much of a hindrance as most people this year have new teams or cars to get used to so I think it will on the whole be a fairly equal playing field. I personally think I am ready. The preparation the Hyundai Power Products Rally Team has put in has been exceptional and the training, refinement of notes will hopefully take us to the next level and I would like to thank everyone who has helped us get to the start line of the first round.

“Our plans are simple, we want to be challenging for some strong results from the get go and by the Cambrian at the end of the year, be there in the mix –  challenging for the title. I am delighted to be in the Hyundai i20 – a car that has won BRC rounds over the years, have the Dai [Roberts] sat alongside and the experience he brings at this level and the backing of Hyundai Power Products. With all my partners – the whole package is brilliant – and one I want to fully utilise and get the most out of this season.” 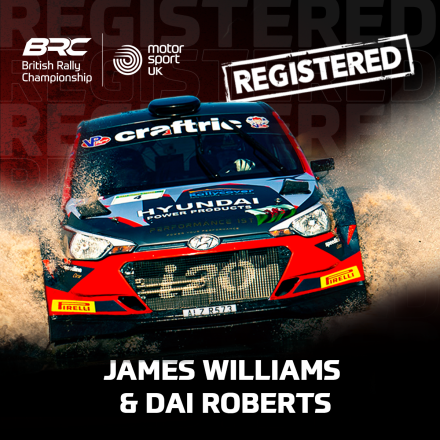