William Hill a sure bet for BRC success

William Hill is the latest driver to the join the Prestone MSA British Rally Championship as the Worcestershire-based driver enters the Nicky Grist Stages in his Ford Fiesta in the National Rally Cup.

Hill has been rising through the ranks and sees Britain’s premier rallying series as the next logical step in his rallying career.

“The BRC was the next thing after the British Tarmac and BTRDA series’,” explained Hill. “The level of competition is the top level in Britain and it’s the perfect place to prove ourselves on a big stage. What also appealed to us was the variety of events and the history associated with them, as well as the competition – it would be a real adventure to tackle some of these longer events.”

The Englishman has an impressive record so far and hopes the National Rally Cup outings this year will propel him into a full campaign in 2018.

“Last year was my first full year in rallying and it was very successful for us as we won the B10, front-wheel-drive and Junior classes in the British Tarmac Championship and that has really has given us hope and confidence to set-up into the BRC. We will be using the Ford Fiesta which was a R200-spec car but when the engine went bang we put in a standard engine with the R200 ECU. We are in the National Cup and looking forward to comparing times with those in the Cadet and Junior BRC. At the minute, it will be the Nicky Grist and Isle of Man for us but we are looking at doing the Ulster as well. It will be good practice for next year as we hope to sort a full season out for 2018.”

The Nicky Grist Stages is the baptism for William in the BRC but his objectives are very simple ahead of his home round.

“The gravel is new to me on the first day but I hope to just grow in confidence on the first day and then push forward on the second day as I know Epynt well after four or five attempts at it. I have good and bad memories of the place and I certainly hope it will be good this weekend. The plan is to finish and I think that’s a good target to start with.” 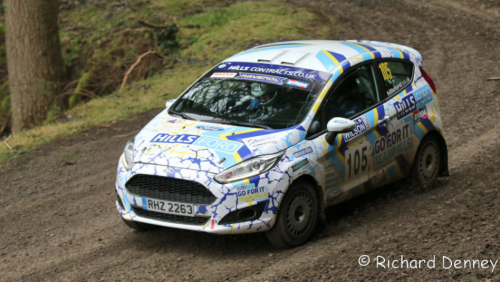