In the Prestone MSA Motorsport News Junior British Rally Championship, Welshman James Williams and English co-driver Ross Whittock lit up the stages in their Vauxhall ADAM R2. Williams broke his BRC podium duck in Ypres 12 months ago and a year on went two better to clinch his first Junior BRC victory. Despite a spin on stage 11, thus losing his grip on the top of the timesheets, a spirited fight-back allowed Williams to spray the champagne and claim the honour for the fastest R2 front-wheel-drive car on the event and the Junior Tony Pond Award. Williams played his Joker Card in Belgium, giving him a further five points to catapult him to the top of the championship standings.

William Creighton and Liam Regan pushed the Vauxhall duo hard in their Peugeot 208 R2 and inherited the lead when Williams faulted. Unfortunately, the thousands of fans stage-side were denied a battle royale as on stage 15 the crew from Northern Ireland slid into an infamous Belgian ditch and retired on the spot. Second went to BRC debutants Josh McErlean and Aaron Johnston (Ford Fiesta R2T) while another crew new to the podium, James Wilson and Gavin Doherty (Peugeot 208 R2) made it three different marques inside the top three

Steve Rokland’s last international rally on the sealed-surface was the Circuit of Ireland two years ago and the Norwegian endured a tough Tarmac baptism on the Belgian lanes. On stage five the Pirelli Rally winner made a rare mistake and slid into a ditch. Thanks to the local spectators the Peugeot driver got back onto the road but had to change a puncture, putting him several minutes off the lead. A spirited fight back enabled Rokland to claim fourth, securing important championship points.

Kevin Horgan brought the lone Skoda Fabia R2 to Belgium after a disappointing early bath on the Pirelli Rally. The Irishman quickly learnt the differences between Irish Tar and the Belgian asphalt and put in a strong performance on the stages to finish in fifth.

The Harper Adams University team endured a tough event in their Fiesta R2T but their never give up attitude saw them open their 2018 points account. 10/10 for the celebration at the end with both James McDiarmid and Gareth Clarke climbing onto the roof to celebrate and thank their team for their had work.

Sadly the tough, two-day Belgian event claimed several retirements. Marty Gallagher showed great podium running pace but his 208 R2 dropped a cylinder on the penultimate loop of stages. The Irishman elected to not risk further damage as they look towards their home round. William Hill was set for a top five but had to park his Fiesta R2T on the roadside when the clutch had cried enough.

Series returnee’s Alex Waterman and Nabila Tejpar where both puting new cars through the Belgian stages. Waterman in his Fiesta R2T was getting used to the turbo machine but was trying too hard on the final stage of the opening day and crashed out of a points paying position while Nabila Tejpar in her Peugeot 208 R2 had to retire on stage 18 with a mechanical problem. 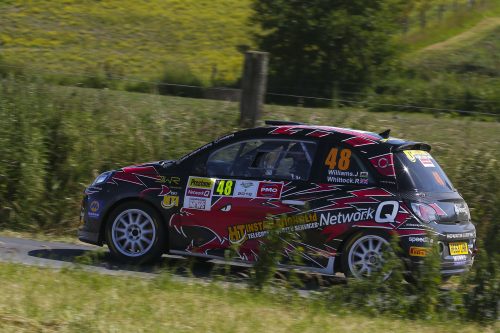