Wildcard Brynildsen is in it to win it

Eyvind Brynildsen has today announced his plans to enter the Prestone MSA British Rally Championship. The Norwegian is set to be a one-off wildcard on the Pirelli International Rally (29/30 April), with more rounds planned later in the season. Backed by Pirelli, Brynildsen is hungry for success and aims to put the cat amongst the pigeons in his Betsafe Ford Fiesta R5 run by the experienced Autotek team.

As well as being a WRC2 front-runner, Eyvind is leading the Norwegian Rally Championship and saw the opportunity to flex his international muscles in the forests of Britain. The 29-year-old is eager to keep sharp and mix it with the championship’s established names.

“Doing a BRC round made sense for me as we are fighting for the Norwegian Championship and the next round is a week after the Pirelli,” said Brynildsen “I haven’t driven properly on gravel yet this year, as we have had to deal with the snow and ice in the Nordic countries.”

Eyvind is no stranger to the iconic Pirelli Rally, having contested the Cumbrian event in 2008, taking a Mitsubishi Evo 9 to a strong seventh overall. This time around, the international star has just one objective in mind.

“We last entered the Pirelli Rally in 2008,” recalled the Norwegian. “It’s very special, it’s fast and can be slippery if the weather changes and road position can be a factor. I may not have been there for a while, but I remember the stages. I will have good notes to start from and I will be looking at a lot of in-car footage. Local knowledge may not be important as the trust in the pace notes will be the key. As a driver, I like it when the conditions are varied and you have to find the grip and be at the top of your game on every stage fighting for every second.

“I want to have a good battle with Fredrik Ahlin [BRC Championship leader]. He pushes hard and will be difficult to beat as he and CA1 Sport make a great combination with their new car. We might struggle initially as we haven’t rallied on gravel for a while, but we will work on the set-up beforehand to give us every chance on the Pirelli Rally. I don’t start events to finish second, I want to be pushing for the win and believe I can be at the front. As Betsafe say, I will be in it to win it.”

Calling the notes for the driver from Norway is Swede Anders Fredriksson, and the car of choice for the Scandinavian duo is the menacing, black Ford Fiesta R5. Running the turbocharged, four-wheel-drive machine will be the successful Autotek team which helped guide Elfyn Evans to the overall title last year.

“I know Autotek really well and have built up a good professional relationship with them over the years,” enthused Brynildsen. “They ran my cars in the World Rally Championship when I was a DMACK driver in 2013 and 2015. We will be supported by Pirelli on the event and to have that support from the factory is very important going into the rally. Together, we will be a strong team and hope to replicate Autotek’s success from 2016.”

Of all the championships around Europe, the WRC star had no hesitations in joining the BRC fray with the calibre, history and prestige providing the pulling power for Brynildsen to throw his hat into the ring.

“The BRC competition is at a real high level, whereas the level is perhaps struggling in Norway and other Scandinavian countries,” Eyvind reflected. “There are so many reasons why the BRC is so appealing for international drivers. The conditions and events are so varied and extreme, the PR around the championship is strong, the fans and supporters are brilliant no matter the weather and the atmosphere is incredible.

“We are leading the Norwegian Championship and that is the main focus this year, although like us, Betsafe are keen to do more BRC rounds as well. At the minute, we are doing just the one round, but perhaps we might also enter another event at the end of summer. If we do well and score good points, it will be interesting – we will have to see what happens.” 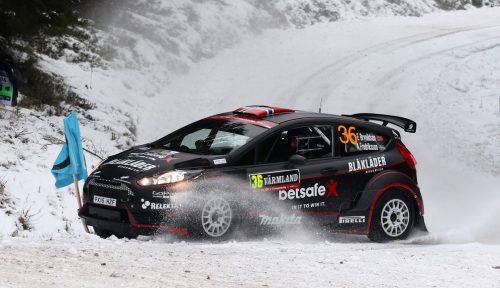