Despite there being one round to go, White and co-driver son Mathew took the category win in horrendous conditions in Northern Ireland which was enough to seal the championship win. He will now head to the Rally Isle of Man without the pressures of a title to contend with.

White, from Barnsley, has made the switch to a two wheel drive Fiesta R2 this season after campaigning a more powerful Subaru Impreza in the National Asphalt Rally Championship for many years. In a bid to broaden his rallying career, White embarked on a season in the BRC and would need to learn fast if he was to succeed in the series and mirror his Group N title on a sealed surface.

Having never contested a gravel event before, White endured a difficult baptism on the opening forest rounds of the season, even electing to miss the Scottish Rally and re-coup ahead of the mid-season break.
The midseason shift onto asphalt was a welcome one and White soon felt much more at home on the grippy stuff. Despite a distinct lack of competition in the category, White would head to the Ulster Rally looking to repeat his victory at last month’s Nicky Grist Stages in Wales.

The Londonderry based event would prove to be one of the hardest events in the calendar as treacherous conditions greeted the crews on both days of the event. Rain, followed by sunshine then further rain made predicting the surface of the closed public roads impossible and would claim many top-line crews over the course of the event.

But the Two 4 Motorsport pilot kept largely out of trouble and put his previous experience to good use. Despite the loss of the intercom and a noisy transmission over the closing stages of the event, White nursed the Fiesta across the podium to spray the champagne not only for a class win but for the title too.

“I’ve said all year that it’s a shame we didn’t have more competition in the class but you know it’s a huge personal achievement for me to change direction like I have and see my pace increase throughout the year,” said an elated White.

“To be National Asphalt Group N champion and now BRC4 champion is a fantastic honour especially as it’s been in two very different championships and cars.  It’s been a tough year though and I really didn’t gel with the gravel at first although I found my mojo with that on the Nicky Grist. I still prefer the tar though!“

White has enjoyed the challenge that the BRC has offered this season and is eager to ensure his winning ways continue on the final round.

“The last round is on the Isle of Man is probably one of my favourite events so it will be nice to go there without one eye on the championship and just enjoy the stages,” he says.

“We have had a great season and I’d like to thank all our sponsors for their support this year, we could not have done it without them”.

White will now head for Rally Isle of Man in September for the final round of the series. 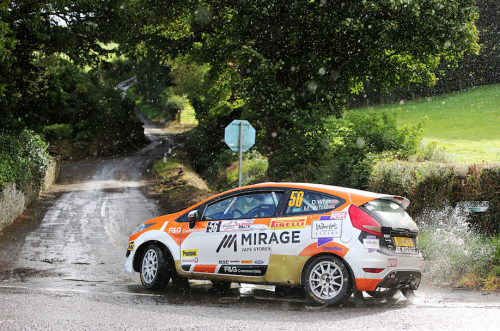