Kyle White and Sean Topping have been announced as winners of the Junior BRC category at last month’s Nicky Grist Stages [9th July] after a timing error awarded them an incorrect time on the fourth stage of the event.

A subsequent administrative error meant that the correct time was not awarded by the organisers before the results went final, with current Junior leaders Eamonn Kelly and Conor Mohan taking the win in the original event’s Final Results.

Subsequently, the organisers, after extensive consultation with Motorsport UK were able to correct the error, with the results once again becoming provisional for seven days, before going final yesterday [3rd August].

The Nicky Grist Stages would play host to the first gravel round of the 2022 season and all eyes would be on the Junior BRC fight in Wales. The ultra-competitive youngsters are vying once again for a chance to win a supported drive in a Hyundai i20 Rally2 on a WRC round in 2023, so clearly, the battle for top spot is always feverish.

The super-fast Welsh gravel welcomed a scintillating Junior battle with the lead changing hands over the course of the day.

Fastest out of the blocks was Junior BRC newcomer and Australian driver, Max McRae. Co-driven by Mac Kierans, McRae is the son of 1995 BRC champion Alister and is clearly a chip off the old block, leading the charge after the opening stage in his Ford Fiesta Rally4. But it wasn’t long before White took the reins in his Peugeot 208 Rally4, coming perilously close to his maiden Junior win.

But it wasn’t all plain sailing for the Northern Irishman and in a dramatic final two stages, White would suffer two punctures in two stages, dropping a chunk of time to nearest challenger Kelly.

Admitting to being “caught sleeping” in the morning, Kelly had closed in on White as the day progressed and was on fine form in the afternoon loop of four tests. White’s deflated rubber offered a glimmer of hope for a second win of the season, but the Peugeot driver had enough in hand to retain the lead and secure his maiden, albeit belated victory.

“We had a great run to start [the rally], really getting the feel of the Rally4 car in the forests. We were a little cautious on the first stage, but took the lead on the second stage, and held a small advantage going into the fourth Crychan test. I felt confident with the car and we had a real go.”

“The tyres wore down to the wire on the last stage and we had to drive three miles on punctured front tyres, and we lost over thirteen seconds to Eamonn. Since the event concluded the Clerk of the Course and Motorsport UK have worked to right the situation and have reinstated us as the rightful winners. The importance is that the maximum score now puts us just eight points behind Eamonn Kelly, and we still have our joker to play for added points, so it livens up the title race.”

Kelly took a close second and still retains the series lead, whilst McRae was delighted with his performance on his Junior BRC and British gravel debut.

Johnnie Mulholland and Eoin Treacy scooped another solid performance in their Fiesta Rally whilst Ioan Lloyd and Sion Williams were in the fight for the Junior podium early on before being forced out before service. They used Super Rally to gain valuable mileage for the season ahead.

The series stays on gravel for round four as the Grampian Forest Rally near Aberdeen offers classic stages in the Kincardineshire forests on 13 August. 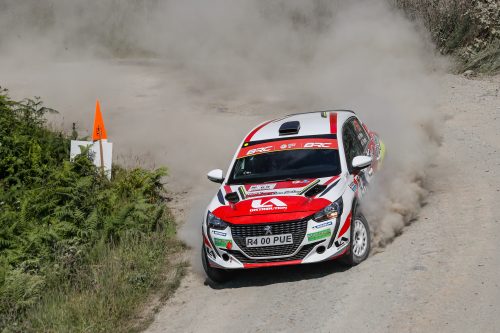