When two tribes go to war!

CA1 Sport and M-Sport will be locking horns for the final time this season in the Prestone MSA British Rally Championship as they prepare for battle on the classic Rally Isle of Man.

The honour of top rally team in Cumbria is about to be blown out of the county as the Carlisle and Cockermouth outfits will be vying for supremacy as the best rally team in Britain, with the teams’ championship still very much wide open going into the final event of the season.

In the red corner – CA1 Sport. They may appear the underdogs on paper but the growing outfit has boasted an experienced line-up in 2017 including Jamie Anderson, Thomas Preston, Scottish Rally winner David Bogie and championship leader Fredrik Ahlin. Team Principal Martin Wilkinson is the man at the helm and is pleased to be back in Britain’s premier rallying series – fighting at the sharp end of the time-sheets.

“It’s really appealing to do your domestic championship and we have done a few years in the WRC and ERC with different customers but it was good to come back to the BRC – a championship I have been a big supporter of over the years,” explained Wilkinson. “The reincarnation last year was really good so it’s quite nice to do the series with some really fast drivers in the team and be fighting at the front.”

“There is a lot of experience in our team and the average age is a lot higher than other teams but it’s good to bring that experience in and pass it onto the drivers and share knowledge with them. It’s great to have drivers taking everything onboard and to see their improvement is very satisfying, not just in terms of car set-up but the mental attitude and the whole approach to an event.”

CA1 Sport currently lead the way in the teams championship with a healthy 22-point advantage going into the Manx double-header ahead of rivals M-Sport.

“M-Sport… who?” joked Martin. “I worked at M-Sport for a number of years and it’s a company very close to my heart. While I am aware M-Sport have bigger fish to fry than CA1 Sport, it’s still nice to be here against them, have the banter and finish in front of them. We are still top of the table and yes that is where we want to end up. We were even talking about bringing a secret weapon back for the Manx!”

In the blue corner and a stones throw south of CA1 Sport is WRC powerhouse M-Sport. The Cockermouth operation has been involved in the BRC since its establishment in 1997, but in 2017 M-Sport has put together a two-car team for Britain’s premier rallying series. Team Manager Scott Erskine has reveled in the British Championship campaign and understands the championships importance for the team.

“The main reason we got more involved in the BRC was to use the championship as a development set-up not only for our drivers but for the whole team,” explained Erskine. “We have a young group of guys and we follow the same principle as the championship. We want to develop the team and give them the experience to then move onto the WRC team.”

Despite only being in its first full season in the BRC, M-Sport currently trail its Cumbrian counterpart. However, never discount the team in blue as the M-Sport cohort have two drivers firing on all cylinders on the sealed-surface and are ready to overhaul the team from Carlisle.

“We have a great line-up, which has really progressed this year. Alex [Laffey] is a young driver still in early development stages and we have been really pleased with his progress in 2017. Keith [Cronin] we knew would be quick from the off and pushing for wins – which he has done already, so we have a good solid team to fight in the team’s championship.”

With the gloves on, the Ford Fiesta R5 team are in the best form after their Ulster Rally win and will give everything they have to turn things around at the summit of the standings.

“We have really enjoyed the battle with CA1 Sport this year and we all get on… fairly well! The banter has been good this year and the competition has been strong. We are happy with our first year performance considering they have quite an experienced line-up and a year head start in the BRC, so to still do battle right up the final round is pleasing for us and it’s great to be in the fight on the Isle of Man.”

The season has ebbed and flowed for both outfits but it all comes down to just one event – the season finale on the Isle of Man. With the rivalry about to come to the boil both team managers remained unmamiously friendly. “May the best team win” came out of the mouth of both camps ahead of the season curtain call. 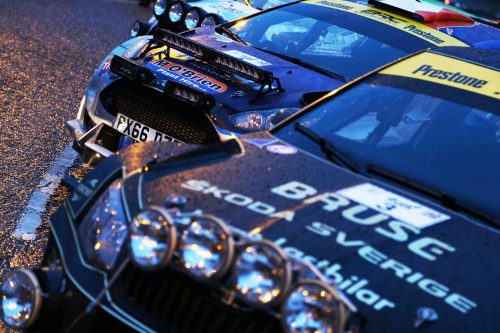