The new car has been built by his own Lampeter-based Scott Williams Motorsport team and will be seen for the very first time on the event. Established in April 2016, SWM has already enjoying great success – with another one of Scott’s Mk2 Escorts currently leading the highly competitive Irish Historic Tarmac Championship.

For the Guinness Pro12 winning Scarlets Rugby centre, the Quinton Motor Club organised Nicky Grist Stages will be his first visit to the famous asphalt roads of the Epynt military range. Not only will Scott’s appearance be a huge draw to the many Welsh sports fans who will travel to Epynt to watch the rally, he’ll also play a vital role in the safe running of the event.

Scott Williams said: “I’ve never driven as part of the Safety Car Team on Epynt before, so I’m really looking forward to it. Epynt is well known in rallying as a very tough and challenging venue – very fast and narrow, with blind crests and no margin for error. I’ll be driving the Zero Car on the Sunday, so whilst we’re not competing, we travel at around eighty per cent competitive speed, so we won’t be going slowly either! My business, Scott Williams Motorsport, is building a brand new car, and the Nicky Grist Stages will be its first reveal. We want as many people to see the new car as possible, so running in front of the competitors on a round of the British Rally Championship is a fantastic opportunity to do just that. It’s going to be a lot of fun but we have a serious job to do ensuring the safety of both the competitors and spectators. I haven’t managed to talk Nicky [Grist] into co-driving for me yet – he said that he wants to see me drive first!”

Nicky Grist said: “We are delighted to have a sporting celebrity from the rugby world on our event, and with Scott Williams so engaged and fanatical about rallying we are delighted that he can come and do a safety car job for us. All eyes will be on him, and I’m sure that his nerves will jangle a fair bit more on this event than they do on a Six Nations match for Wales!”

Neil Cross, Nicky Grist Stages Clerk of the Course, said: “Having reliable Safety Cars running ahead of the field is a vital part of the event planning and having Scott out on the asphalt stages is an important part of that planning. Scott will be in close contact with me in Rally HQ and the MSA Safety Delegate out on the stages advising us on certain aspects of the stage set up.” 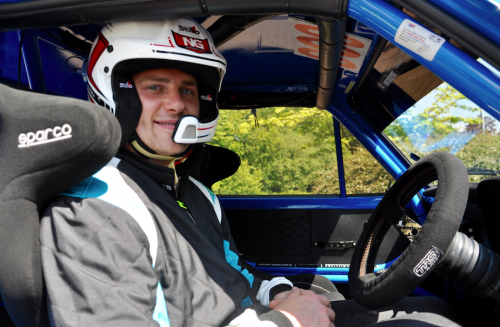