After a successful debut season in the sport which saw the duo take an impressive third overall in the series designed for up and coming young drivers, the English-pairing will now step into one of the most hotly contested categories in the sport.

Switching to the more powerful Ford EcoBoost 1.0litre Fiesta, Waterman and Thomas will tackle the six rounds of the championship with backing from EDSL and join recently announced teammate Josh McErlean in the MH Motorsport camp.

Waterman feels he is more than ready to make the switch into the category and is looking forward to the prospect of competing against some of the best Junior talents in Europe.

“We couldn’t be more excited about stepping up into the R2T,” he says.

“It was the logical progression from our first year in the sport, you never want to get too comfortable.  That’s when your progression and learning slow down. It’s no secret that the competition is going to be extremely tough for the Juniors this year. There are guys that have been driving for a lot more seasons than us so we need to take everything in our stride and not get too caught up in the junior battle.”

He remains realistic about the goals for the season.

“Our hopes are fairly simple in as much as we want to get to get as much seat time as possible in the new car and continue to develop our skills. Harry will also be developing as we will be writing our own pace notes for the first time. We have a clear 2-year plan in place and this year isn’t about places, it’s about experience.

The duo started out in the sport just two years ago, contesting smaller events in the older 1.6 litre Fiesta R2 to gain experience for the season in the British Championship and Waterman feels more than at home in the latest spec machine.

“The Fiesta is the best R2 car out there. Again thinking of progression, M-Sport has got it spot on with the R2T having an identical cockpit to that of the R5 as well as being a turbocharged car it will mean that making the switch to anything like an R5 in the future will be much easier. Add this to the great set up that MH Motorsport has and their close relationship with M-Sport, we feel that we are in the best hands for the 2018 season.”

MH Motorsport enjoyed a buoyant 2017 season in the British Championship, narrowly missing out on the Junior title with Norwegian ace Oscar Solberg. With the theme of progression an important part of the firm’s ethos, they saw 2018 as the right time for Waterman to step into the R2T machine.

“We are really pleased to welcome Alex and Harry back to the team this season and of course we are delighted to see him make the leap into the new Fiesta,” said Team Principal Mike Harris.

“They have taken the right steps throughout their short career and are taking each season at a time which is refreshing.  They had some great results with us last season and it made complete sense to put them into the Junior category where the pace will be pretty intense. It will be an important learning curve but I think they will take it all in their stride. Both Alex and Harry are a great addition to the team and we look forward to a great year with them on board”.

The Prestone MSA British Rally Championship takes in six rounds across the UK, starting with the NCS Border Counties Rally on 10th/11th March. The season finale’ will take place on Britain’s round of the FIA World Rally Championship in October, The Dayinsure Wales Rally GB. Before then the pair will campaign their R2T for the very first time on the Cambrian Rally this weekend. 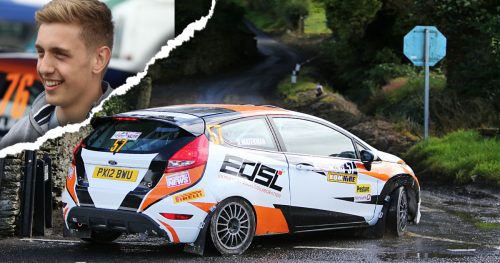