Twenty-two-year-old Alex Waterman is set to graduate to the Junior BRC in 2018 after a successful first year in the Prestone British Rally Championship.

Waterman, along with co-driver Harry Thomas tackled their first full season in rallying last year at the wheel of a Ford Fiesta R2 in the newly formed Cadet Cup. The 2017 season ebbed and flowed for the Surrey-based star with a dramatic roll on the season opener on the Border Counties Rally.

Bouncing back on the Scottish Rally, Alex opened his points scoring account and a class podium in Ypres followed. The momentum continued with his first class win on the demanding Nicky Grist Stages just one event later. A solid second half of the year saw the Leatherhead driver claim third in the standings.

After a strong debut season, Waterman and Thomas have thrown their hat into the ring early – as they eye a move up the ladder into the Junior BRC.

“We feel that we progressed very well during 2017, especially when remembering that it was our first year in the sport. To come away with third in the championship including a class win was just amazing. We had our ups and downs throughout the year but learnt so much in such a short time and believe we are ready to take that knowledge into a newer R2 car and the juniors. Its no secret that we will be up against crews with a lot more experience then us, but 2018 will be all about learning the new car and developing our skills as well as getting as much seat time as possible. We feel that the BRC offers the best experience for that with it being the only championship in the UK with recce. With Harry being selected for the MSA Co-Drivers academy we will have a big push in learning more about the art of writing pace notes and the BRC offers the perfect platform to do that.”

With his eye on progression, Alex is now in the process of finalising his weapon of choice for the season ahead.

“We have tested the M-Sport Ford Fiesta R2T both in Poland and in Wales and feel it is the best R2 car out there, offering us a car that we are vaguely familiar with, having driven the older generation of Fiesta this season. It feels and handles very similarly but does everything better and so will make the step up to the new spec R2 and juniors easier. We also feel it is vital to start driving a turbo car to then make the progression into anything 4 wheel drive easier.” 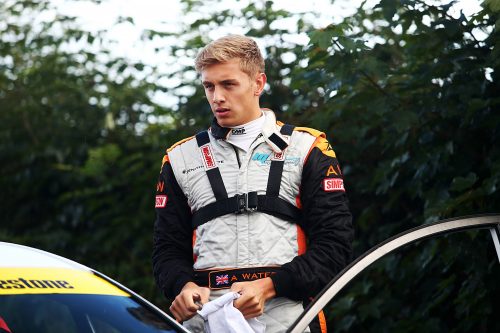