#22 Josh Moffett/John Rowan – only his second WRC start and struggled with the headlights pointing skyward on Saturday night but overcame this to head his brother home 14th.

#23 Sam Moffett/Karl Atkinson – in the private family battle took the lead for the first two stages but then lost time through a stall and fell behind Josh. Stayed there to the end, finishing 15th only 13sec behind his brother.

#46 Tom Cave/Craig Parry – joined us at the start but sadly had pull out before the first stage due to a family bereavement. Everyone connected with the event sends their condolences. Told the audience at the Rally Forum that he hopes to be in BRC next year in a R5 car. Cave vs Vatanen to recommence?

#64 Osian Pryce/Dale Furniss – played a big role in promoting the rally, but decided to save budget in the end for next year, possibly for a DriveDMACK Fiesta Trophy challenge in 2016.

#75 Marty McCormack/James O’Reilly – celebrated turning 30 on Sunday with a big cake in the shape of his rally car, which was better news than his alternator failing after SS3 on Friday. Finished 46th after Rally2 penalties.

#78 Chris Ingram/Gabin Moreau – was sitting second in both the JWRC and WRC3 classes until the car drowned out on the road section out of SS17 Alwen and woudl go no further. A strong performance until then.

#82 David Higgins/Craig Drew – JRM Group prepared this very special liveried Subaru in record time for the multiple US Rally Champions to celebrate 20 years since Colin McRae became WRC Champion. Finished 20th overall with no issues, beating several R5 cars in the process and underlining that BRC2 could be very interesting next year.

#84 David Bogie/Kevin Rae – the multiple Scottish Rally Champions were back to sort out unfinished business from last year but a spin on SS4 damaged the radiator, the engine overheated and the car was on a trailer heading home on Friday night. Third time lucky in 2016?

#85 Jonny Greer/Kirsty Riddick – Amongst the non-priority runners they were the head of the pack on Friday night. The weather was against them on Saturday and they had to retire on the 2nd run through Dyfi after stopping 5 times to clear the screen that was misting up badly. A clean run on Sunday saw them finish and Kirsty’s rock buns were well received in Rally Control.

#87 Max Vatanen/Jacques-Julien Renuci – just managed to maintain their record of completing every stage they contested in 2015, as the clutch gave up after the last stage on Friday night. Second overall in the RC4 class. Now for a Fiesta R5 in the BRC.

#92 Robert Duggan/Kevin Glynn – if they had been registered for JWRC/WRC3 they would have been battling for victory. Brilliant for a first rally outside of Ireland, only his third gravel rally and having not made their own notes before! Finished 48th after Rally2 penalties when the water pump failed. 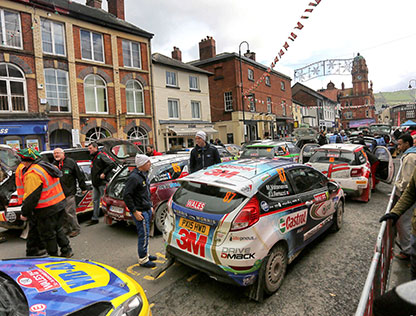