Vauxhall Motorsport will return to the British Rally Championship for 2016 with an Adam R2, after unveiling its new challenger at Rallyday.

The team will be run be the experienced Major Motorsport outfit, which is headed up by 2015 MSA Asphalt champion and Metro 4M4 pilot Simon Mauger.

“I started my rally career and won my first title in a Vauxhall so this is particularly special,” said Mauger, who entertained a number of interested parties over the course of the one-day event. “We’re working on behalf of Vauxhall, not dissimilar to what M-Sport does with Ford,” said Mauger, “Vauxhall is throwing everything behind us. We’re really looking forward to the year. We’ve already a lot of young drivers who like the look of the car.”

Emil Bergkvist steered an Open Adam R2 to the European Rally Championship Junior title this year and Mauger is certain it isn’t just the driver responsible for the success.

“Emil is a very good driver, but you can see how good the car is. It is the benchmark in the ERC. We want to provide a real opportunity for young driers and we are hoping to bring the Adam Cup to the BRC with a prize fund and let up to the R2 class.

“The extent of this will depend on attracting commercial partners but we already have several companies interested, including German oil company Ravenoil, who have already committed to the project.”

The team is also targeting privateers, with the operation open to supplying parts to independent entries.

Mauger added: “We hope the cars will be of interest to privateer drivers. We will be responsible for selling cars, parts and providing technical support.” 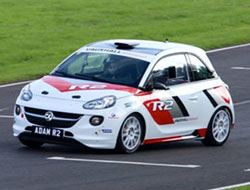