Vatanen name is back in the British Rally Championship for 2016

The Vatanen name will return to the British Rally Championship next season after Max Vatanen signed to handle a Drive DMACK Ford Fiesta R5 in the series.

The 24-year-old Finn will follow in the footsteps of his father Ari, who won the British Rally title twice.

Vatanen, who tested a DMACK Fiesta R5 car ahead of Rally Finland, said” “To be given the chance to drive in the BRC is a great opportunity and one that I will certainly make the most of.

“There is a lot of heritage of Finnish drivers competing in the British championship and I’m proud to be following my father, who won the championship twice,” said Vatanen Jnr. “The events are great, each one different and the experience I had of driving the Fiesta R5 for the first time last week has got me really excited.

“The team at DMACK is doing a great job with helping young drivers get experience and progressing their careers.”

Vatanen, who lead the Drive DMACK Trohpy after Rally Portugal in the WRC, a championship comprised of some of the most promising young drivers in world rallying. It is a single make championship with M-Sport prepared Fiesta R2s used as the chosen vehicle, Brits Tom Cave and Gus Greensmith also compete in the series.

DMACKS Dick Cormack said he was looking forward to seeing a Finn competing at the highest level of British rallying again.

“The way Max is coming on, he’s obviously a great driver and it’s good for him to be there – it would be nice to see more Finns coming over to see how they stack up against him,” he said.

“This is a real coup for the BRC and for DMACK to be involved with our brand ambassador Ari Vatanen – who has real history in the series – can only be good for the BRC.”

BRC chief Ben Taylor added: “To have a Vatanen as the first person signing up for the BRC is fabulous news. Our intention is to return the BRC to the level it was when Max’s father Ari was competing. We don’t just want to be attractive to British drivers, we want the BRC to be the proving ground for drivers from all over the world, as it was when Ari won it.” 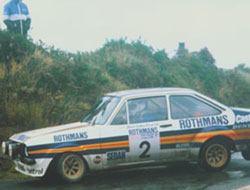