A host of Rally stars joined organisers and special guests at the historic Guildhall Square, Londonderry, for the launch of the 2017 John Mulholland Motors Ulster Rally. Returning to Derry City and Strabane for the second year promises both competitors and race fans an action packed weekend of motorsport throughout Derry and Strabane on Friday 18 and Saturday 19 August 2017.

This year the Rally welcomes contenders from the FIA European Rally Trophy (Celtic Cup), the Prestone MSA British Rally Championship and the Clonakilty Blackpudding Irish Tarmac Rally Championship. Stages again feature the full breadth of Counties Londonderry and Tyrone with two regroups, one in Derry/Londonderry’s Guild Hall Square on Friday and the other in Strabane Town Centre on Saturday of the event.

“It is an honour to be returning to such a prestigious venue as the Guild Hall to launch the second year of the John Mulholland Motors Ulster Rally in this historic City. We have the ideal event base at Ebrington Square with two new regroups this year in Derry and Strabane and a host of classic and challenging stages throughout the region”.

“But it’s not just the venue and stages that make these events, the stars of the event are the drivers, co-drivers and their cars and this year’s Ulster Rally promises a fantastic array of machinery crossing the start ramp in the Guildhall Square at lunchtime on Friday 18 August. We have a great selection of local competitors, many of them young and some very young, who are already making their mark in the sport. Callum Devine, Marty Gallagher and Gordon Noble venture successfully well outside Ireland; we also have Alan Atcheson, Joe McGonigle and Eathan McColgan. And what about our motorcycle racer Michael Dunlop who is now firmly caught up in rallying ?

We welcome the Prestone MSA British Rally Championship back to the Ulster Rally stages and we are looking forward to the battle for supremacy between the R5 cars in the British series and the Irish Tarmac Championship regulars. We are hopeful that our local home-grown talent will again be fighting for pole position in their respective categories in all the major championships included in this year’s event.

Robert continues; “It’s great returning to a venue for the second year and this which could only be made possible by our sponsors Derry City and Strabane District Council and John Mulholland Motors, along with Tourism NI and Visit Derry, our local stage sponsors and the 800 volunteers who give of their time so generously. The plan’s in place to make 2017 the best event yet.”

Headline Sponsor, John Mulholland Motors is based in Randalstown and Campsie and John himself was one of the first to put in his entry for this year’s event.

“This is our second year of a three-year agreement as main sponsors of the Ulster Rally, an event I have been competing in since 1994.

This year is extra special for us as it marks my 25th anniversary of participation in this iconic motorsport event. To celebrate I will be behind the wheel of a new Skoda Fabia R5 sporting a black and gold livery in recognition of us wining the UK Skoda retailer of the year (for the second time).”

Welcoming the event back to the City is Mayor of Derry City and Strabane District Council, Councillor Maolíosa McHugh; “I am absolutely delighted that the Rally organisers have teamed up with our local club – Maiden City Motor Club – to bring this prestigious sporting event to the North West region for the second year in a row. It’s also great to have our local sponsor, John Mulholland from Campsie on board once again.

In terms of economic benefit for the city and region, the John Mulholland Motors Ulster Rally will have a huge impact in terms of bringing visitors to the City who will stay locally and hopefully spend money at our local restaurants, shops and bars. We are confident the Rally will create a great buzz and excitement across Derry and Strabane throughout the month of August.

Entries for the event are now open and the organisers, The Northern Ireland Motor Club Ltd anticipate a top line up of local and International competitors and a host of the frontrunners from the various Irish and Northern Ireland Rally Championships. Also included in this year’s Ulster Rally programme is the popular Historic section and the recently introduced Junior category. 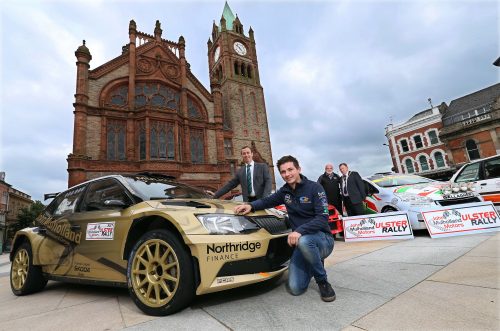