A host of Rally stars and their cars joined organisers and special guests at the sunny Antrim Castle Gardens, for the launch of the 2018 John Mulholland Motors Ulster Rally.

The event returns to the Antrim and Newtownabbey area on the 17th and 18th August and is once again the only rally to host both the major international championships – the Prestone MSA British Rally Championship and the Irish Tarmac Rally Championship, in addition to the FIA Celtic Cup, a round of the European Rally Trophy. This allows the best British and Irish rally drivers to compete head to head on renown Ulster Rally stages.

Robert Harkness, Event Director commented on the exciting move back to Antrim:

“We are delighted to return to the Antrim and Newtownabbey Borough Council area and we appreciate both the enthusiasm and the substantial support of the Council necessary to promote an event of this magnitude. It is indeed exciting to see the event back in Antrim where many people see the town as it’s natural home.

We are looking forward to a large entry as the route takes in some of the classic County Antrim special stages where we have provided the usual spectator areas. We also encourage spectators to join us for the non-competitive parts of the event that take place in the town centres of Antrim, Ballyclare, and Randalstown, as well as the Start and Finish in the award-winning Antrim Castle Gardens.”

With backing from John Mulholland Motors and Antrim and Newtownabbey Borough Council, the event will have its Service Park in Central Car Park beside Castle Mall in the heart of Antrim town, with the beautiful Castle Gardens as the venue for the rally start and finish. In addition, there will be town centre regroup areas in both Ballyclare and Randalstown.

The Friday competition kicks off at 1 pm and takes in three classic County Antrim stages; coincidentally these same stages will be used as part of the Deja Vu Ulster tour later in August. The two most northerly stages are repeated in the evening. On the Saturday, there will be one stage close to Antrim town combined with two popular Sperrin mountain stages – all repeated again in the afternoon. In summary, 100 competitive miles on stages that have been previously acclaimed as the best closed road special stages in the British Isles.

Headline Sponsor, John Mulholland Motors is based in Randalstown and Campsie and is also excited about the move back to Antrim and looking forward to competing on some of the classic Ulster stages:

“I am thrilled that the Ulster Rally is returning to our home Borough and we are sponsoring this prestigious event. It is always fantastic to help raise awareness and promotion of motorsport in Northern Ireland. I also compete in the rally and I’m looking forward to the challenging County Antrim stages.”

Welcoming the event back to Antrim, Mayor of Antrim and Newtownabbey, Cllr Paul Michael commented:

“We are delighted that such a prestigious sporting event is returning to our Borough. Major events such as this make a huge contribution to raising the profile of Antrim and Newtownabbey Borough as a tourist destination throughout the island of Ireland and on the international stage. The last time we hosted the event in 2012, almost £1million of economic benefit was generated and we hope to increase on this for 2018. I hope everyone is geared up for this action-packed weekend.”

Stena have been assisting Ulster Rally competitors with reduced fares on the Scotland to Northern Ireland ferry crossing for nearly forty years. The arrangement has now been expanded to incorporate the BRC events but any competitor wishing to avail of the reduced fares on this route for the JMMUR can contact the Entries Secretary.

This year we will also host a one day Super Saturday Ulster Rally over the Saturday stages for those who want to do a shorter one day only competition. Entries for both the 2 day and the Super Saturday events now open. 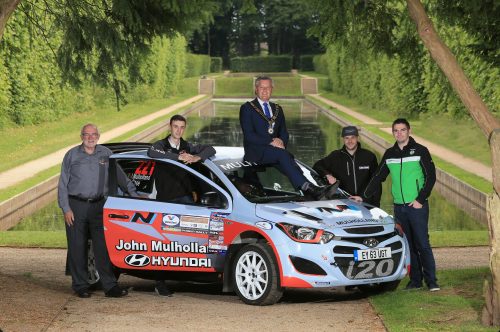