The opening three rounds of the Prestone MSA British Rally Championship has provided plenty of drama and excitement on the stages of England and Scotland so far this season. Tyres play an important part in the overall strategy and making that right decision can mean the difference between a rally win and being off the fast and furious pace in Britain’s premier rallying series.

Five heavyweights do battle on the best stages in Britain. DMACK, Kumho, Hankook, Michelin and Pirelli have brought out the best product to help teams top the time sheets. So who tops the class in each of the BRC classes?

So far this season DMACK has been the class of the BRC1 field with the Cumbrian firm claiming the laurels on the opening three rounds. CA1 Sport teammates Fredrik Ahlin and David Bogie have made it a clean sweep for Skoda so far but there are a host of other drivers hot on the heals of a BRC win this season.

Marty McCormack is starting to come alive in the BRC and has two podiums with Kumho. Can Marty McFly in Belgium and claim his first ever BRC victory? With a move to Tarmac, McCormack can never be discounted.

Matt Edwards is developing new Hankook product in the forests and Tarmac lanes of Britain and Belgium. The Welshman in his Fiesta R5 already has a top five under the belt with the Hankook tyres coping well in tough conditions and will be eager to stand on the podium in 2017.

The French tyre firm has two stars in the BRC top flight. Rhys Yates in his Fiesta is showing real progression in his second year in Britain’s premier rallying series and also has a top five in his account and like Edwards will be pressing for podium spoils by the Isle of Man. Desi Henry has had a disappointing season to date but if the Irishman can gel with the Skoda Fabia once again he will be in the shout for podiums as per 2016.

The star driver for the Italian marque was meant to be Eyvind Brynildsen but mechanical woes put the Norwegian out of the fight on the Pirelli Rally before it even began. Solid results from Euan Thorburn, Jonny Greer and Alex Laffey have bagged points and with the move to Tarmac expect Greer and Laffey to be working their way up the order.

Three tyre marks have taken a win in the junior series. Pirelli on round one with Oscar Solberg, Michelin on round two with William Creighton and DMACK on round three with Cameron Davies.

Kumho are the only other tyre manufacturer not to win a round… yet. Callum Devine came close on the Pirelli Rally. 0.3 seconds infact. With a switch to an Opel ADAM and Tarmac coming up, Devine will be a force to be reckoned with. That win wont be far away.

Pirelli hold the advantage with Josh Cornwell sitting pretty at the top of the standings with three wins to his name. Pirelli’s arsenal is strengthened with Tom Williams’ pace and the rise of Alex Waterman in the championship standings.

Fergus Barlow, James McDiarmid and Nabila Tejpar lead the charge for DMACK and hope to spring a surprise and claim silverware for the Cumbrian outfit.

Gee Atherton leads the way for DMACK but the Red Bull athlete will miss a few rounds to nurse his Mountain Biking injury. Looking to capitalise will be Tarmac specialist David White who hopes to take class honours for Pirelli.

In the NRC Donnie Macdonald has taken two wins for DMACK while John Morrsion leads the way for Kumho after his Pirelli Rally success. Spencer Wilkinson is the sole runner in the Production Cup but is proving the reliability and toughness of the Pirelli rubber.

The championship has one day of gravel remaining with focus now almost entirely on the sealed-surface. Will supremacy change? Only time will tell. 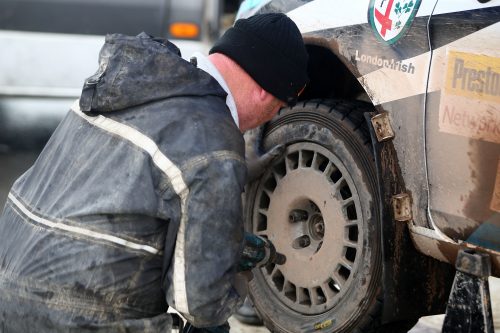