Twenty one year old Charlie Todd will make his debut in the British Rally Championship – and the sport at the Nicky Grist Stages, driving an EDSL Sport Ford Fiesta R2T in the Academy Trophy.

Todd, co-driven by Glyn Thomas in the Copley Estates backed machine, will contest his very first stage rally at the Builth Wells based event after admiring the sport and BRC from afar since he was a youngster.

Now, after heading towards his final year of University, Todd has been given the opportunity to head out onto the stages and is set to contest a selected programme of BRC events in 2021.

“I come from a family with significant background in motorsport which mainly centred around circuit racing” says Todd.

“My father used to successfully compete in Formula Renault 2000 but couldn’t quite get it together to make it into Formula Three – basically due to funding. So I was around motorsport from a young age and ended up being involved with my friends and family when testing cars and shaking them down. I enjoyed that, but being from a farming background, I felt much more comfortable on a loose surface”.

Thanks to the land available, Todd and his friends were able to hone their skills on the farm tracks at home and even built a rally stage to practice on. Having followed rallying for many years, he was finally able to get behind the wheel of a rally car and was soon planning his next move.

“I’ve admired the BRC for many years and wanted to be part of it and thought, I just need to get on with this,” he says.

“I’d followed Rupert’s [EDSL teammate Rupert Flynn] story from being a karter and then moving to rallying and the EDSL Sport team so got in touch with them and got myself a test. I had one asphalt test, one gravel and that was all that was needed to convince me. Glyn [Thomas] offered to co-drive and I’d felt really comfortable with the car and the whole process so thought, let’s get started”.

Whilst the British Rally Championship may be a leap of faith for many, Todd is relishing the opportunity to compete on some of the finest stages in the UK.

“The driving doesn’t phase me but I know that the pacenotes will take a lot of work before I`m up to speed. I won’t be carrying out a recce in Wales so I can concentrate on getting an important finish under my belt and I`m excited to see my plans come to fruition. I couldn’t be happier”. 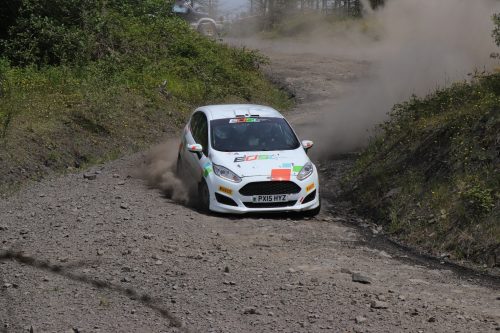