Leading local convenience store, Today’s, has been announced as the headline sponsor of the 2019 Ulster Rally, which will be taking place on Friday 16th and Saturday 17th of August.

Today’s is operated by local wholesaler Savage and Whitten (S&W) and is based at Carnbane Business Park in Newry – the new host city of the 2019 Today’s Ulster International Rally.
The Managing Director of Today’s, Dessie Boyce, and the business’s Marketing Director, Julie Burden, said they are “delighted” to be joining forces with the closed-roads meeting.

“The Ulster Rally has a proud history and reputation for exciting competition,” they said. “We are especially pleased to support the event as it will, for the first time in its history, be based in the city of Newry against the backdrop of the beautiful Mourne Mountains and receive support from Newry Mourne and Down District Council,” added Dessie and Julie.

Welcoming Today’s as the headline sponsor of the event, Event Director, Richard Swanston, said: “This will be an exciting year of new beginnings for the Ulster Rally, with the move to Newry and now a new title sponsor. Planning by our experienced team of volunteers has been underway now for several months and after much hard work the arrangements for the 2019 event are now well advanced. The event will take place on Friday 16th and Saturday 17th of August. Full details of the route will be announced at the rally launch on Tuesday, June 25th.” 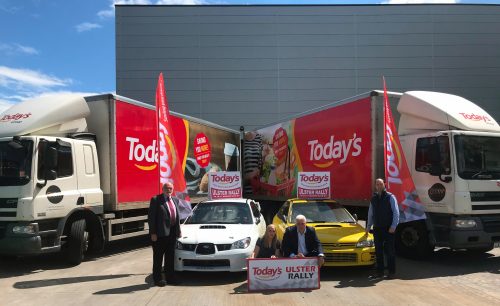