The man from the land down under

Arron Windus is one of three Australians in this year’s MSA British Rally Championship, and the man from the land down under is certainly revelling in the challenges that Britain’s premier rallying series is throwing at him.

Despite limited rallying experience, Windus already has an outright victory under his belt after claiming the Akademos Rally round in the Victorian Rally Championship in a Subaru Impreza last season.

The 20-year-old secured the third seat in the Vauxhall Junior Rally Team at the Autosport International Show in Birmingham back in January, after an intensive two-day shoot-out against seven other young hopefuls. Despite growing up on the other side of the world, Britain’s best roads were calling.

“As a youngster I have always followed the British Rally Championship and I am a big fan of the series,” enthused Windus. “When Vauxhall Motorsport provide the opportunity of a lifetime you would be silly not to take it. It is a big opportunity and I am very grateful to my father, everyone back home and everyone who has believed in me. To be competing in the top level of rallying in Britain is fantastic.”

Arron’s season got off to a positive start on the Mid Wales Stages. Driving the front-wheel-drive R2 specification Vauxhall ADAM in anger for the first time, the Victoria-born driver punched in some respectable times considering he had never driven on snow lined gravel before. With the experienced Rhianon Gelsomino sat alongside him calling the notes, Windus ended stage one in 12th overall. Chipping away at his driving and approach, the youngster pulled himself up to seventh overall in the DMACK Junior catergory at the end of the six stage event.

“Mid Wales was really interesting,” he continued. “From the recce, all the way to the end of the rally, I didn’t know what to expect with all that snow. We had a good start and got a good finish and points on the table.”

Arron’s first ever Tarmac event came on the Circuit of Ireland. It was to be a baptism of fire as he and co-driver Gelsomino faced an uphill challenge from the off. The Australian crew retired on stage one, but got the car back to Service for repair overnight by the Vauxhall team. Bouncing back, Arron chalked up his first top five finish of the season and recorded the third fastest time on stage 13 behind his Vauxhall team-mates Robert Duggan and Mattias Adielsson.

“The Circuit of Ireland was absolutely incredible,” commented Arron. “I had huge expectations and it certainly lived up to all the hype. The roads are magic and it was a big step to learn how to drive on Tarmac, but we certainly had the best car for it. I was so glad to get to the finish and add more points to the tally.”

On the Pirelli Carlisle Rally the ADAM R2 driver notched up another top-ten with eighth in the DMACK Junior BRC category, putting him seventh in the overall standings.

“The event wasn’t too bad for us, but we did have our ups and downs. We had mechanical problems with the gearbox and we only had third on the opening day. On the Sunday we had a really good feeling and attacked the stages and set some good times. Most importantly I am getting my head around the ADAM R2 – the confidence and speed is coming round after round.

“I want to learn the ropes in 2016, stay consistent and build the speed as the season goes on. I would love to be fighting for a podium in the second half of the year but it’s all about experience and getting solid points this year. I want to make a longer term commitment and take this experience into 2017 for a bigger push.”

As part of the learning experience, Arron knows that it is a team game and having Gelsomino sat alongside is worth vital seconds on a stage.

“Rhianan is second to none – having her experience is fantastic and we get along really well,” he concluded. “Having an Aussie alongside me is not only a patriotic thing, but hearing familiar tones helps the relationship in the car. Without her I would have been stuffed many a time!”

Away from the rallying, Arron has recently got engaged to fiancée Ella, but admits a wedding would have to take a back seat – at least for now! Living in rural Devon between the rounds, the youngster will return to his homeland later this week for a well-earned break before the Scottish Rally on the 25th June. 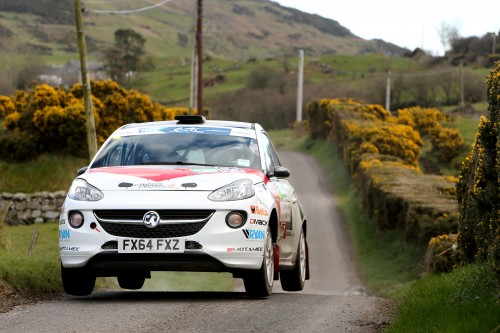