The British Rally Championship has the X-Factor

The cars and stars descended upon the streets of Lisburn this evening as the 2016 Circuit of Ireland was flagged off in spectacular style. Thousands of rally fans saw 80 cars cross the start ramp in front of the Irish Linen Centre Museum for the official Ceremonial Start. Flagging the crews away was Louis Walsh of X-Factor fame and Lisburn and Castlereagh City Council Mayor, Councillor Thomas Beckett.

During the ceremonial procession the all important start order positions where decided following a single-run qualifying stage earlier in the day.

Evans was quickest in this mornings Qualifying Stage and chose to go first on the road tomorrow. The Welshman was over four and a half seconds quicker than anyone else on the 4.22km test. Nine BRC drivers have registered for the European Championship, enabling them to take part in the qualifying session and to subsequently run at the front of the field.

Keith Cronin and Mikie Galvin in their Citroen DS3 were the second quickest BRC registered crew in fifth while DGM Citroen DS3 R5 stablemate Jonny Greer with Kirsty Riddick sat alongside could only manage 18th after a difficult run through the stage.

Third quickest BRC runner through the stage was Marty McCormack and David Moynihan running Kumho tyres on the Skoda Fabia S2000. The pair had a weekend to forget last time out in Mid Wales and will be looking for a trouble free run in Ireland.

Fredrik Ahlin and Morten Erik Abrahamsen were just 0.9 seconds behind McCormack in there Pirelli shod Fiesta R5, despite his limited Tarmac experience while the leading Michelin crew was the pairing of Tom Cave and James Morgan in 10th overall in a similar Fiesta R5.

Neil Simpson and Robert Woodside had a difficult afternoon as both found the conditions very treacherous in their Fabia and Fiesta respectively. Simpson has an extra card up his sleeve as he has elected to play his Joker on the two-day classic. Whatever points the Lancastrian scores on the Circuit will be doubled as he looks to get his championship started after only a handful of metres in Mid Wales.

David Bogie suffered an off in practice earlier in the morning meaning he had to sit out the qualifying stage. The CA1 Sport team, which runs the Scottish star have got the car ready for the 120 mile event tomorrow.

All other BRC crews running in the International field of the Circuit of Ireland had an opportunity to run through the stage as a practice, to get that all important set-up right for the following two days.

The action gets underway tomorrow morning at 09:51. Follow all the action on the BRC Social channels and website as well as the Circuit of Ireland and ERC websites for live radio and video transmissions. 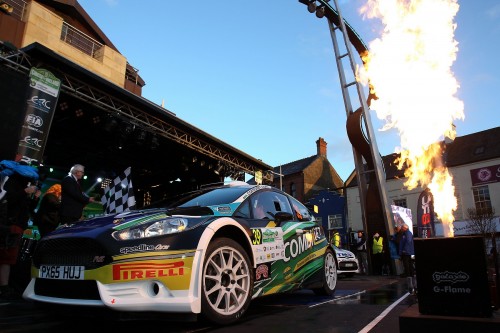