Tejpar looking forward to the Tarmac

Nabila Tejpar is looking forward to a return to the sealed-surface later this month in the Prestone MSA British Rally Championship. The driver from Woodham Mortimer eyes further progression and a Cadet Cup podium before the season is out. We spoke to Nabila about her season so far.

Nabila is well into her second year in Britain’s premier rallying series and is getting stuck into the newly formed Cadet Cup in her Ford Fiesta R2. The 23-year-old may only be in her second year of rallying and is progressing with every stage mile.

“I have been happy with my pace, but I really think there is more to come from me this year,” explained Nabila. I have been frustrated at times as in testing I feel comfortable and confident then it doesn’t translate on events. I have been working on things to change that and on the Manx National earlier in the year, things started to click and was really happy with my speed.”

The Scottish Rally was to be Nabila’s biggest test to date. After a serious crash in 2016, the Essex-based driver was eager to confront her demons and make it to the finish of the demanding gravel event.

“Scotland was really hard for me, I am not going to lie. The night stages were so difficult for me and I was pleased to get into the second day. It was tough passing the same corner I had a big accident on but after passing that – a huge weight was lifted from my shoulders and I was more relaxed in my driving, rather than being tense over things.”

The only female driver in the BRC currently is pleased with her consistency as she has finished all but one of the BRC rounds the MH Motorsport driver has contested in the last two years.

“Consistency is important when in a competitive championship but for the rest of the year I don’t want to just be consistent, I would like to be picking up good results.”

Finding her feet in the Cadet Cup, Tejpar sits in fourth in the standings and has recorded a season best of fourth in class on the Pirelli International Rally and is hungry to claim that elusive podium.

“I really want to be on the Cadet podium before the year is out. Top three in the points would be nice too, but I just want to show some serious progression. I am really looking forward to the Tarmac to come, especially Ypres as I have been looking forward to the event for a while now. I will be working on my notes a lot for the event, putting in a lot of descriptions in, especially for the night stages.”

Up next is the world renowned Ypres Rally in northern Belgium. The BRC takes on the Tarmac for the first time this year and teams are furiously changing their gravel flinging monsters into asphalt hugging racecars. Nabila recently contested the Manx National rally to get her eye in for the sealed-surface challenge coming up but also gain further experience for the demanding Isle of Man curtain call later in the year. 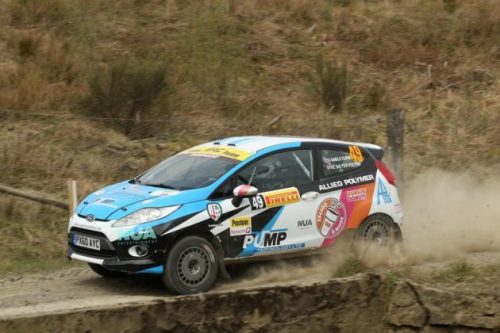