Norwegian Steve Røkland and British co-driver Tom Woodburn performed a front-wheel drive masterclass in the Prestone Motorsport News MSA Junior BRC opening round to take their first win in the series by a comfortable 1 minute 13.3 second victory in a Peugeot 208 R2.

Chalking up all but one fastest stage time on the fast and flowing gravel, the pairing didn’t put a foot wrong and as Røkland played his Joker, the Norwegian now has breathing space at the top of the table after the first round.

Welshman James Williams and co-driver Ross Whittock were a new partnership in a Vauxhall ADAM R2. The Network Q team started off slowly in fifth but played a patient day-long game as they chipped their way up the field through their blistering pace to seal their best BRC finish yet. William Creighton and Liam Regan won the Pirelli Rally in 2017 and after a slow start on the rally the Irish duo clawed their way onto the podium to put their Peugeot 208 R2 into the final rostrum position.

Reining Cadet Cup Champion Josh Cornwell sampled his Peugeot 208 R2 for the first time on gravel. The Englishman felt rusty on the opening few stages but set respectable times towards the event conclusion to round off the top six Junior BRC runners.

New for 2018, the Cadet runners can also score Junior points as the trio of Reynolds, Johannesson and Lang occupied seventh, eighth and ninth on the board as  JBRC runner William Hill overcame a troubled event to notch up the final point in a Fiesta R2T

The team from Harper Adams University graduated into the Junior BRC in 2018 but suffered from boost problems early on which hampered their progress. Driver McDiarmid soldiered on and got the Fiesta R2T to the finish – gaining valuable experience with the new car.

The tough and demanding Pirelli International claimed its first Junior victim on stage two when Kevin Horgan put his Skoda Fabia into a ditch. Showing great speed in his older specification Citroen C2, Scott Macbeth had to also have an early bath two stages later with gearbox woes. 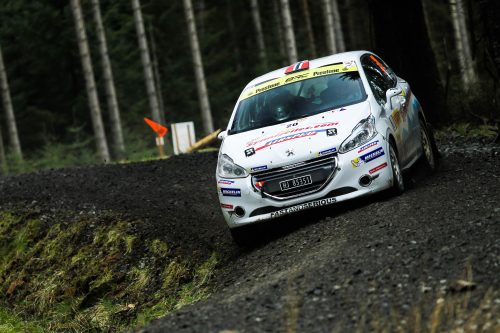