Stage is set for Macbeth

The 25-year-old is set to undertake a selected campaign in Britain’s premier rallying series.

“The competition looks pretty intense this season. I am at the older end of the class so I don’t have many more chances to give it a go, so for the season ahead we decided to throw ourselves at it. We have done the Scottish Championship previously and felt like a change and the Citroen is still eligible so we thought we could see how we fair against the competition.”

The Rosemarkie-based driver is ready to mix it with the best in the category, and believes he can give the Citroen C2 a strong showing against the younger Ford Fiesta R2T, Peugeot 208 R2, Skoda Fabia R2 and the Vauxhall ADAM R2.

“Last year we compared the times and weren’t miles away. On the recent Snowman Rally we were quite strong until we went off. We have no season expectations as the C2 is an older car than the rest of them but I hope local knowledge will help on the first round and we hope to be quick out the traps and get in and amongst the established names. Come the Pirelli, I will be looking to gain more experience, as I haven’t done an event like that before. After that, we will see where we go and what we can do.”

Macbeth will line up for the opening round of the season – the NCS Border Counties Rally. 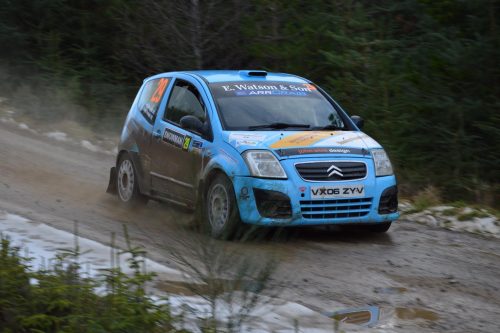