Meirion Evans and co-driver Jonathan Jackson are the recipients of the Pirelli Carlisle SORT Oil Spirit of the Rally award. Coming into the third event of the series, the Welsh pairing have had endured a patch of bad luck leading up to the Cumbrian contest.

On the opening round of the season in Mid Wales many tipped the 20-year-old for DMACK Junior BRC honours in his newly acquired Ford Fiesta R2T after a successful test outing on the Cambrian Rally a few weeks earlier. Evans started brightly on the first loop of stages as he and navigator Jonathan Jackson were in a solid fifth. However, disaster struck on the opening test of day two.

“We had a good start on the Mid Wales Stages and a podium could have been on the cards, but in the snowy conditions I got caught out and slid off the road,” explained Evans. “It was disappointing and we also suffered front end damage on a Tarmac test before the circuit. It just wasn’t going our way”

On the second event of the year, the Circuit of the Ireland, Evans wanted to show his true
potential on the bumpy asphalt of Northern Ireland and by stage four, the Llanwrda-based driver had made his way into the top three. Disaster was to strike again, this time on stage five.

“We have quite a bit of experience in Ireland having competed there in the last few years and we were confident we could grab our first podium. Sadly the turbo failed completely on stage five and we could not continue as we didn’t have a spare, it was gutting especially after not scoring on the first round.”

Heading to the Pirelli Carlisle Rally it was to be a case of third time lucky for the Fiesta driver. Out of the blocks Meirion chalked up the fifth quickest time, slotting in just behind the more experienced quartet of Sindre Furuseth, Gus Greensmith Robert Duggan and Mattias Adielsson.

Evans was desperate for a finish and that milestone got closer as he made it to the end of the first day, entrenched in the podium hunt in third. Throughout the second day the Welshman had battled with Adam Bustard in a similar Fiesta R2T. He sadly couldn’t hold onto his podium position as he was pipped to the spot by a mere 2.5 seconds at the end of the seven-stage event.

“It was third time lucky for us on the Pirelli but it still wasn’t to be trouble free! The car was heavily down on power all rally and when we looked at it in the workshop after the event we found faulty injectors to be the cause of the problems. It was a great fight with Adam [Bustard] all event and I think without hitting a chicane on the final stage we could have had third ourselves.

“We were delighted to be recognised for the SORT Oil Spirit of the Rally award. It was the silver lining and it made our weekend. It has now spurred us on for more and we want to be in the top three on the Scottish next time out.”

On the season ahead, Evans is confident of good things to come after eduring his spell of bad luck.

“We would like to win an event this year to put us back in the hunt for the title especially with the Joker to play and the double points on the Manx. It’s not over until it is over. I am looking forward to all the rounds especially the Nicky Grist with its two-day, two-surface format. That is going to create a real challenge, having to alter your driving style overnight from the gravel to the smooth Tarmac over Epynt. With experience on both, I hope this will play into my hands.”

The crew and Melvyn Evans Motorsport were awarded the Spirit of the Rally prize after a unanimous decision by SORT Oil and the BRC team for their positivity and dedication as they recorded their first BRC event finish and bagged eight points towards their title tilt. Evans and the team have won a £200 voucher to spent on SORT Oil lubricant products throughout the 2016 season.

Meirion Evans and Jonathan Jackson will return to BRC action on the Scottish rally on the 25th June 2016. 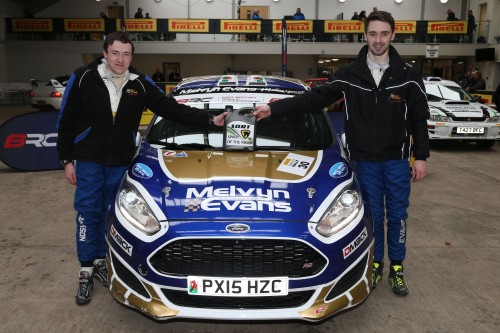