The exams have started and the Football World Cup in Russia is within sight, but every year in June loads of fans look forward to the Renties Ypres Rally. Once again, this year this top competition on the Belgian and international calendar boasts a great billboard, because the registrations are flowing in at VZW SuperStage. We can now already confirm that Thierry Neuville, present leader in the World Rally Championship, will not have it all his own way when it comes to victory in the Westhoek!

In expectation that the Red Devils clinch the World Cup – one can always dream – Belgium is proud of its national duo in the rally world. Thierry Neuville and Nicolas Gilsoul have grabbed the lead in the World Rally Championship! And this Hyundai team will be at the start in Ypres. It goes without saying that they set off as the favourites but seeing they will not be present with their WRC, but driving a Hyundai i20 R5, victory is not a foregone conclusion. This was already the case last year, when Thierry and Nicolas were taken by surprise early on…

A reference of this calibre motivates other stalwarts to take on the challenge, to begin with Kevin Abbring, last year’s winner. This Dutchman, once again navigated by Pieter Tsjoen, the only person to have won in Ypres both as a driver and an eco-driver, will be at the wheel of the brand-new Citroën C3 R5. We also expect the presence of a new Citroën C3 R5 for Kevin Demaerschalk.

Bouffier with a Skoda

And then we naturally have the armada of Skoda machines, led by Bryan Bouffier, who last year stranded some 8″0 from claiming victory. The Frenchman, the recent winner of the Rallye d’Antibes, is undoubtedly a serious contender for victory, as is the Norwegian Ole-Christian Veiby, who is coming to build up asphalt experience in Ypres. For further keen top players we need to think of Hermen Kobus, who on each occasion plays into the Top-5 with his Skoda Fabia R5.

And then we have the Belgian devotees with fast Skoda Fabia R5 cars, led by Belgian champion Vincent Verschueren, Kris Princen, Sébastien Bedoret, Didier Duquesne, Davy Vanneste and several other top players who are still expected, among which Cédric Cherain.

Keith Cronin defends the British honours with a Hyundai i20 R5

Similar to the Jobfixers, many British drivers, who are competing in the second event of the Prestone MSA British Rally Championship, opted for a Ford Fiesta R5, such as Alex Laffey, Sam Moffett and Matt Edwards. Keith Cronin, who last year as first British driver at the finish won the Tony Pond Award, is defending his title with a Hyundai i20 R5, whereas other serious contenders have gone for a Skoda, such as Martin McCormack and Rhys Yates. And in the Peugeot camp, last year on hand with Kevin Abbring, confidence has grown following the victory of Guillaume de Mevius in Oostrozebeke.

With the teams still sorting out various formalities, we arrive at some 30 R5 machines, so that we are heading towards a brilliant billboard. Especially seeing the battle between the British and Belgian Juniors in R2 will be equally thrilling.

And last but not least we have the pure spectacle of the Porsches 997 GT3 brigade, with stalwarts such as Tim Van Parijs, Patrick Snijers, Gunther Monnens, Chris Van Woensel, Claudie Tanghe, Jochen Claerhout, Fredericq Delplace and Yves Bruneel, all renowned drivers who no longer need to prove their speed.

Once again, the speed level will be exceptionally high on the 23 special stages of the Renties Ypres Rally!

For more information head to www.ypresrally.com/en 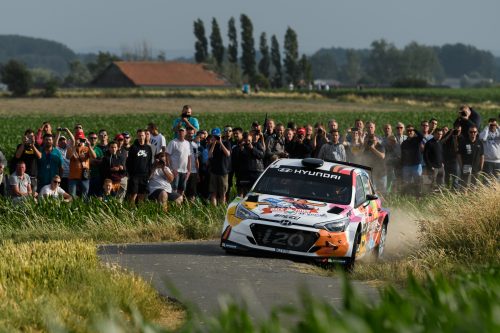