Hampshire based preparation firm MH Motorsport will mount a three-car assault on this year’s Junior Prestone MSA British Rally Championship as Norwegian ace Oscar Solberg announces he will re-join the team ahead of the opening round of the series, the Pirelli International Rally (28th April).

Solberg, son of World Rally Championship legend Henning, will drive an MH Motorsport Ford Fiesta and will be co-driven by Patrick Barth. The duo will join his already confirmed team mates Josh McErlean/Aaron Johnson and Alex Waterman/Harry Thomas. They will all compete in identical 1.0litre EcoBoost R2T’s.

Confirmed only this week, a last minute deal will see Solberg return to the team which gave him his inaugural Junior BRC win on the Border Counties Rally back in March 2017. Solberg enjoyed the best possible start to his campaign last season with the team and despite a strong showing throughout the year, could only manage third spot in the championship.

With some of the closest competition on offer in the series, the Junior BRC is one of the toughest categories on the five round tour. But now, armed with valuable experience of the events and a closed season testing programme firmly under his belt, Solberg returns with the sole aim of lifting the title this time around.

“I hope to do the whole series,” said Solberg. “We’ll start with the Pirelli and see how things look after that. I think it will be good to go back to two-wheel-drive again, and I know a lot of the people who are driving in the Junior BRC so I’m looking forward to it.

Team boss Mike Harris is delighted to welcome Solberg back to MH Motorsport for a second season.

“I won’t lie, it was very much a surprise phone call from Norway last week and we had to work hard to pull the deal together in just a few days” says Harris.

“But Oscar really is a stand out talent and we knew we had to have him back in the team and give him another shot at the Junior BRC title this season. He fitted in perfectly last year and had to really work hard to learn the events and stages. But this time around, he has all that knowledge under his belt and I truly think he will be right up there from the word go”.

The 2018 championship marks MH Motorsport’s second Junior BRC campaign with the Ford marque and the Fiesta R2T is a popular choice with young drivers aiming to reach the top echelons of the sport.  They see this year as one of its best chances of taking the title thanks to a stronger than ever team line up according to Harris.

“We already had a great team heading to the opening round of the BRC, even before we had Oscar on board.  Josh (McErlean) is another rapid driver who will be looking for wins this season and Alex (Waterman) is learning very fast. Along with his upgrade from a 1600cc Fiesta to an R2T, we have a mightily impressive line-up in 2018. It’s certainly a proud moment and after the delayed start to the season, this weekend can’t come soon enough.”

The Pirelli International Rally takes place on Saturday 28th April and offers over 80 stage miles in the Kielder Forest complex near Carlisle, Cumbria. 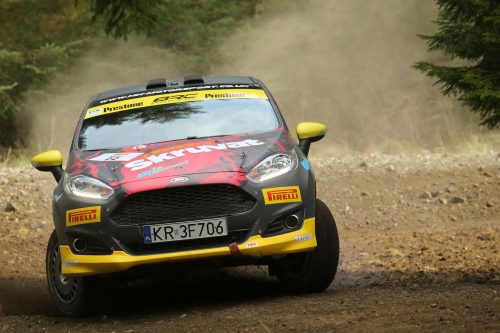