For 16 years, Neil Simpson has enjoyed Northumberland’s Kielder forest on two wheels – fitness training on his mountain ‘bike in England’s largest working forest. But that pedal-power pace is about to get an awful lot quicker, as he returns to the narrow gravel roads in his Simpsons ŠKODA Fabia R5 for Round 3 of the MSA British Rally Championship, the Pirelli Carlisle Rally (April 30-1 May).

This will be the fifth time that the 44-year-old ŠKODA UK dealer principal from Clitheroe in Lancashire has contested the Pirelli Carlisle Rally – and the Fabia R5 will be the fifth different car he’s entered the event in! Simpson has never failed to finish the rally, but a 12 year sabbatical from motorsport means that the last time he contested the event was in 2000. Sixteen years ago he was lying third overall in a Group N car when he was forced to stop and change a puncture mid-stage, which dropped him down to 10th at the finish.

Co-driven by Elliott Edmondson, Simpson is keen to continue his 100% finishing record on the Pirelli Carlisle Rally – something he and the entire Simpsons ŠKODA Motorsport team are focused on doing after retirements on both previous rounds of the 2016 BRC. His early exit from the recent Circuit of Ireland was extra disappointing, as Simpson was playing his Joker and hoping to double any BRC points scored.

Driving for a finish doesn’t mean that Simpson will be hanging around. Far from it, as he’s aiming for a top 10 finish in his ŠKODA Motorsport-built Pirell shod machine.

Neil Simpson said: “After the start we’ve had to this year’s British Rally Championship, the Pirelli is definitely a rally we need to finish! The last time I was in Kielder forest in a rally car was sixteen years ago, but I do go mountain ‘biking a lot up there, so at least it will feel familiar – albeit at a much faster speed than I normally travel through those forests. Whilst reaching the end of the event is a must and something the entire team is focused on achieving, I would like to finish in the top ten. The competition will be very tough and a lot of drivers will be out to prove themselves, but I think a top ten result is a very realistic aim. We just need to turn our luck around and have a trouble-free run.”

This year’s Pirelli Carlisle Rally celebrates the 40th running of the Cumberland Sporting Car Club-organised event and the 25th anniversary of Pirelli sponsorship. The event begins at the Pirelli factory in Carlisle at 12.30 on Saturday 30 April, with day one containing four stages, totalling 44.31 miles. It will be a challenge, as the day’s competition is all done with only a midway 15 minute remote service in Hawkhirst, where the amount of repairs mechanics will be able to carry out will be limited. Day two only lasts four hours, yet once again it’s all action and even less repair time. Beginning at 08.00, three stages totalling 29.49 miles follow, before the finish in Carlisle at 12.00 – with the sting in the tail being the Chirdonhead stage, which, at 16.15 miles, is the longest of the event. Rally headquarters, the main Service Area and finish ceremony will be located H&H Group facilities, near junction 43 of the M6. 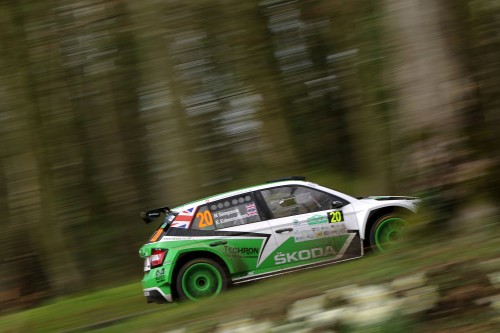