The Prestone Motorsport News Junior BRC provided another glimpse of the stars of tomorrow. Callum Devine and Keith Moriarty in their Michelin-shod Opel ADAM R2 were top of the timesheets after the opening stage, with Devine utilising his Ypres experience from last year to good effect.

Hot on the Irish crew’s heels were Chris Ingram and Elliott Edmondson. The English pairing were competing as a one-off in Britain’s premier rallying series in a Network Q-prepared Opel ADAM R2. Ingram was contesting his fifth Ypres Rally and made use of his European Rally experience on the second stage by snatching the lead from Devine. However, he had to relinquish the lead on the fourth test back to Devine. That put the bit between the teeth of the 2016 European two-wheel-drive champion, as he scampered away to a healthy one-minute margin before he unfortunately rolled out of the event. A cruel blow to the Opel factory driver.

Devine had shown brilliant speed and traded times with Ingram at the top of the Junior standings. After coming so close to victory on the Pirelli Rally, he and Moriarty tasted the champagne at the spectacular ceremonial finish in Ypres and in the process made it four different winners from the first four rounds. The victory was made even sweeter for the young-gun as he lifted the Junior Tony Pond Award for the highest placed Junior BRC driver.

Championship leaders William Creighton and Liam Regan were keen to sample asphalt for the first time this season. With more experienced rivals visiting ditches and retiring, the Peugeot 208 R2 team were out to finish and haul more points towards their championship ambitions. The Irish pair didn’t have it easy as they were pushed all the way by James Williams and Dai Roberts. The Welsh partnership took their first podium and perhaps more impressively were the first Ford Fiesta R2T crew to the finish in Ypres.

Meirion Evans and Jonathan Jackson recently visited Belgium to contest Rally van Wervik, using the mileage to gain vital experience of the Belgian roads. The Peugeot 208 R2 crew were on fine form until a rare off for the Welsh duo saw them slip down the order. A second day charge brought Evans and Jackson up into fourth place, securing vital championship points.

Oscar Solberg was getting used to his weaker surface in Ypres and the Norwegians flamboyant driving style certainly pleased the locals. Along with co-driver Patrik Barth, the Scandinavians were setting some respectable stage times until an off on the second day dropped them down to fifth. With the car looking very second hand Solberg and his MH Motorsport team will face a tough 11 days to get the car ready for Nicky Grist Stages.

Marty Gallagher and Dean O’Sullivan were rapid in their Peugeot 208 R2 on the Thursday evening Shakedown and were eager to impress on their favoured surface. A mechanical failure on stage one left the Irish crew on the backfoot, but started the second day under Super Rally conditions, with the 208 team picking up sixth – a small consolation for their efforts.

The biggest upset was the retirement of Cameron Davies and Caron Tomlinson. The Scottish Rally winners came to Belgium on a crest of a wave and were looking for a another podium. An off from Davies saw the Welsh crew get stuck into a ditch. With small gaps between crews, the car behind came round the corner, attempted to brake but sadly plowed straight into the Peugeot 208 R2. The damage looks terminal and could be the end of the likeable Welshman’s season. Cameron is a fighter and we hope to see him back in action soon. 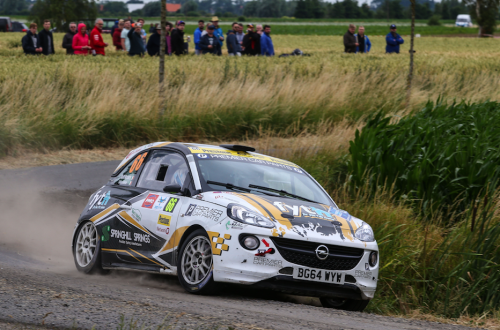