The Irish success continued into the Prestone Motorsport News Junior BRC as Callum Devine and Keith Moriraty clinched the championship and the £30,000 cash prize – one the biggest prizes in British motorsport.

After a blistering drive on the opening leg to win the first round, Devine shifted the balance of power from rival William Creighton into his own hands ahead of the second round. The Opel ADAM R2 driver had to finish in front of his rival to secure the Junior prize.

Creighton and co-driver Liam Regan (Peugeot 208 R2) had been consistent all season and had never been out of the top four on each round. A fourth place on the opening round then put the pressure on the Irish crew as they had to beat Devine in a straight fight on the final round of the championship. A puncture on the third night stage on Saturday evening resulted in a two and half minute deficit. The fans were sadly denied a front-wheel-drive shootout as Creighton’s eventual fifth was sadly not enough as Devine finished in a comfortable second on the final round of the season.

Norwegian Oscar Solberg, like Matt Edwards in the main category, had to win both legs and hope his rivals faulted for any chance of success. Solberg in a Ford Fiesta R2T with new co-driver Dale Furniss treated the spectators to some flamboyant driving on their way to a third and fourth to put Oscar third in the Junior BRC standings.

As the title fight raged on, Marty Gallagher and Dean O’ Sullivan were out to break their victory duck. A third in Scotland earlier in the year was then backed up with a second on the first Isle of Man round, before Gallagher flew the 208 R2 through the lanes to complete his 2017 podium sweep by claiming the final Junior BRC round victory – the fifth different driver to do so this year.

“It’s unbelievable. It’s something we have been aiming to do and wanted to win for the last few years and its just brilliant, brilliant! The car made every knocking and rubbing sound possible but I held it all together and took it easy on the last stage to bring it home, just can’t believe it.” 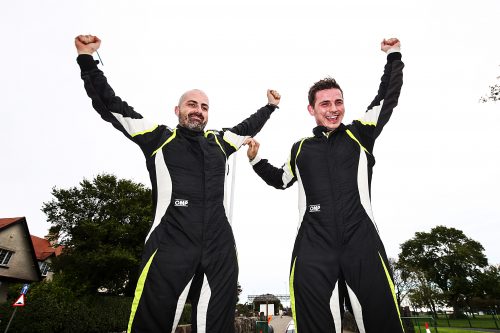