SEEDING FOR THE ULSTER RALLY

The submission of entries phase of the 2018 John Mulholland Motors Ulster Rally is now closed and seeding of the entries is now complete.

Event Director, Robert Harkness explains; “Seeding is a complicated process that decides the running order of the competitors in the event. It is a key part of the event both for the competitors but also for the running of the event itself. It must not only reflect the pace of each competitor but also consider their current position in the major championships and respect the requirements of teams running two or more cars..”

Robert continues; “There are five high speed special stages on closed for the event public roads on Friday 17 August and six more on Saturday 18 August. This is the core of the competition and why seeding is so important.”

The John Mulholland Motors Ulster Rally is the only rally in these islands that represents the FIA European Celtic Rally Trophy, the Prestone MSA British Rally Championship and the Irish Tarmac Rally Championship. The entries reflect this influence as competitors pursue their own targets.

The competition is of coursed spiced up by the only head to head of the year between the Irish Championship and the British Rally Championship.

The British Rally Championship is currently led by Matt Edwards and Darren Garrod from North Wales in their Ford Fiesta R5 who are only twenty points ahead of last years winners Keith Cronin and Mike Galvin from West Cork / Killarney this time in the latest Hyundai i20 R5 from Hyundai Motorsport. But there are twenty five points for a win.

The Antrim and Newtownabbey Borough Council supported two-day rally is centred in Antrim and the drivers will speed off from the Antrim Castle Gardens and will stop at major controls in Ballyclare on Friday and Randalstown on Saturday.

The full seeded entry list will be available from the Competitor section of our website at the start of the event week. 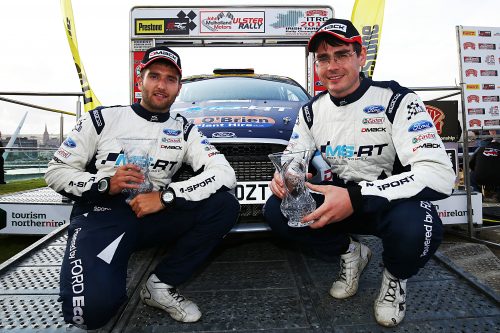