Scottish Rally gears up for 2017 event

Representatives from Dumfries and Galloway Council met with rising Scottish rally ace Keith Riddick this week to officially launch this year’s RSAC Scottish Rally in Dumfries and the town of Moffat.

Having supported the event for over 20 years, Dumfries and Galloway Council Communities Director Derek Crichton unveiled one of the most popular and biggest events in the Scottish motor sport calendar alongside Haugh of Urr’s Scottish Rally Championship contender Riddick. They were also joined by The Lord Lieutenant for Dumfriesshire, Fiona Armstrong.

The 72nd running of the RSAC Scottish Rally takes place on 19th/20th May and the event is proud of its association with the local authority. Its long term relationship is thought to be a record between a council and a motorsport event in the UK.

In a change to last year, the event base will move to Lockerbie Lorry Park which will host Rally HQ, service and Parc Ferme. The rally proper will kick off on Friday 19th May where competitors in the British Championship and National A events, will cross the High Street ceremonial start in Dumfries, before heading into the forests to contest two stages in the Greskine Forest complex under the fading daylight.

Saturday 20th continues with the Scottish Rally Championship contenders joining the event with classic Scottish Rally tests such as Twiglees, Castle O’er and Ae lying in wait for them before returning to Lockerbie for the finish celebrations at around 2pm. There is no rest for the BRC crews however as they will head back out to the forests to tackle two more stages before their finish celebrations in the town of Moffat.

Thanks to the support of the region and the local council, the event is able to showcase the South West of Scotland as a fantastic backdrop for this exciting motor sport event.  “Dumfries and the surrounding forests have all the ingredients to make a superb event for competitors who will travel thousands of miles to compete” says Clerk of the Course Jonathan Lord.

“But we simply could not offer these classic stages, without the help and support of Dumfries and Galloway Council. They have been instrumental in enabling us to put the event together for many years now and we are very grateful for all their help over the years.”

Dumfries & Galloway Council’s Derek Crichton attended the event launch on behalf of the Local Authority and was delighted to welcome the rally back to the area alongside rally star Riddick. “Within the Council we do our utmost to support the planning and delivery of the Rally, to bring superb live motor sports to our region, and to showcase south west Scotland” he says.

“The Scottish Rally is a key part of our sporting heritage and I’m delighted that it once again plays host to both the Scottish and British Rally Championships. The adrenalin is beginning to kick in as we gear up for another superb weekend of world class action!!”

More information on the event, including spectator information is available at www.scottishrally.co.uk or keep up to date with event information via social media: 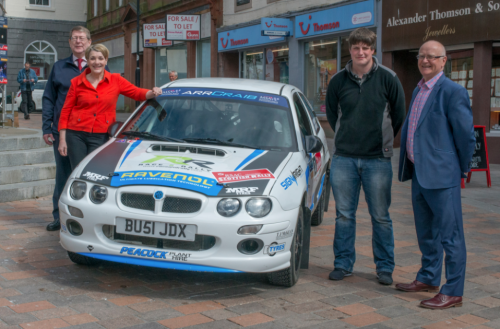