“It’s always been a dream to do the BRC. I am 25 now, so it’s now or never to do the Junior BRC. It’s really, really exciting – the rallies on the calendar, the buzz and the competition is going to be unreal. When you get the chance to tackle this famous championship, you have to just go for it.

The BRC new boy may be the most green when it comes to experience, but that’s not going to stop him from getting into the mix with the established names in the series. Along with co-driving brother David Sloan, the pair can’t wait to get stuck in as Scott explains.

“To do some big, big rallies will be a new thing for me. I enjoy the gravel and have a lot of experience on the loose, but tarmac will be a new ball game for me as I have never driven on a asphalt rally before. West Cork will be my debut, but it doesn’t faze me too much. The chance to do 160 miles and two days in the car will be great seat time and I hope to then use the experience gained to push on in Ypres and again on the Ulster. I am really looking forward to the Galloway Hills as it’s my home event. By then I would like to be competitive so I can compare times against the top boys.”

The Scottish driver comes into the JBRC with five years of front-wheel-drive experience behind him. Sloan is under no illusion of the new challenge awaiting him with his French pocket-rocket.

“The Peugeot is a cracking car. I have only done two events and already it’s completely different to anything I have driven. There is a certain way you drive these cars to get the most from them. We had an accident at the back end of last year so we are on the back foot, so we will sadly not test before the Cambrian, so it’s going to be a real baptism of fire on the opening round.”

An excited Scot but his registration on Deadline Day and is reveling in joining the BRC and is keen to show his speed, but he knows the challenge facing him. A mature approach will stand him in good stead for the year ahead.

“My aim this year – I have to be realistic. Some of the guys have 4 years in these cars. I don’t have four events yet. It has to be about continuous learning and get to the end of these events and points would be nice.

The competition is unreal and I think this year will be the most open the JBRC has ever seen. I think five, six or even seven drivers could win it. It’s going to be a special year and I can’t wait to give it my all and see what I can do.” 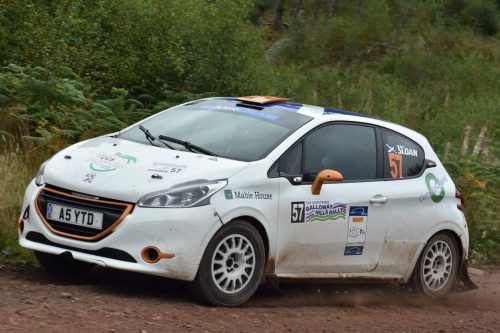