Scorching pace from Solberg in Scotland

In the Prestone Motorsport News Junior British Rally Championship, the action was fast and furious throughout with the latest crop of young talent putting on a brilliant display in their front-wheel drive machines.

The famous Solberg name immediately made an impact in the BRC, as Oscar Solberg and Patrik Barth claimed a hard-fought win on the Border Counties Rally in their Ford Fiesta R2T. Son of Henning and nephew of Petter, Oscar delivered a stellar run to take the championship lead as well as clinching the honour for fastest two-wheel drive car and a hard-earned outright BRC point.

Hot on the Scandinavian pairings’ heels were a brace of Peugeot 208 R2s. Making his BRC comeback was Irishman Dean Raftery and new co-driver Tom Woodburn. Having not been in competitive BRC action for a few years, Raftery quickly brushed off the cobwebs to settle into the overall mix from the outset, netting second in the standings.

Surprising many was young William Creighton in another Peugeot 208 R2. The Northern Irishman had only entered a handful of gravel rallies before making his BRC debut, and he put the cat well and truly amongst the pigeons. With Liam Regan expertly guiding, the pair chalked up the fastest time on the first stage to lead the rally before being overhauled by the more experienced gravel drivers.

Welshman Meirion Evans in a third Peugeot 208 R2 was extremely pleased to finish in fourth with Jonathan Jackson alongside. The young pair had not had a trouble free run on a BRC event since the Pirelli Rally last year. Hot on their heals was the Irish pairing of Callum Devine and Keith Moriarty in a MH Motorsport run Ford Fiesta R2T. Devine had not driven on gravel in a two-wheel-drive car before and showed great promise to land fifth.

Marty Gallagher and Dean O Sullivan showed great promise in their Peugeot 208 R2 but were dogged by punctures and technical problems on their way to sixth while Cameron Davies and Caron Tomlinson in another 208 R2 had a difficult BRC debut but were pleased to bag seventh and six championship points.

“It’s really good to have finished our first BRC rally, and if I am honest I am totally surprised we got the win. I got into a good rhythm really quickly which helped us, as the roads were incredibly difficult with so many stones and big rocks, meaning not getting a puncture is very important.  I’m feeling really good with the car and looking forward to the rest of the series. We will try to drive as fast as we can and get more points on the next round.” 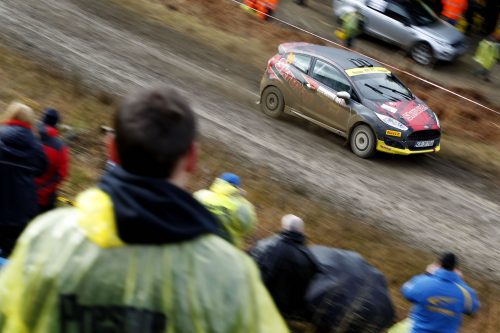