RUMBLE ON THE ROCK

The 2017 Prestone MSA British Rally Championship title fight will go down to wire at the end-of-season finale on the 138.com Rally Isle of Man (14-16 September). After six rounds across England, Northern Ireland, Scotland and Wales and an overseas event in Belgium, Britain’s premier rally championship will be decided on the Isle of Man with three days on the famous motor sport roads. With two sets of championship points on offer for the double-header, a battle royale is set to rage across the picturesque island.

Sweden’s Fredrik Ahlin, Irishman Keith Cronin and Welshman Matt Edwards all have a mathematical chance of lifting the coveted overall crown while William Creighton, Callum Devine and Oscar Solberg will do battle for the Prestone Motorsport News Junior BRC title, with the winner scooping a substantial £30,000 cash prize – one of the biggest in British motor sport.

Sweden’s Fredrik Ahlin will arrive on the island as championship leader – having taken three wins already this season. The Skoda Fabia R5 driver tackled his first Rally Isle of Man last year and since then he and Norwegian co-driver Torstein Eriksen have found a mature, consistent and smooth approach on the sealed-surface to back up their electrifying pace on gravel. The CA1 Sport driver is fired-up ahead of the championship showdown as he hopes to become the first Swede to lift the BRC title since Stig Blomqvist in 1983.

“We have had a really consistent year and I have taken a measured approach compared to last year. I have pushed hard on the gravel and three wins have set up the championship nicely for me. I have really improved my Tarmac pace to back up the speed on gravel, and that was clear in Ypres and on the Ulster, so coming to the Isle of Man I am confident I will have the pace to fight for the championship.  I know what is needed – a clean, calculated and solid performance. May the best man win.”

Three-time BRC champion Keith Cronin is a man coming to form in this year’s contest and has been the driver to beat on Tarmac in 2017. The M-Sport star took the first overseas round victory with a sensational win in Ypres, which was then reinforced by a clinical triumph on the recent Ulster Rally. Along with co-driver Mikie Galvin, the reigning Irish Tarmac Champion needs to win both legs of the event to be in with a chance of claiming a dramatic fourth BRC title.

“We had a difficult start to the year – we got a few punctures on the first event and seemed to get more on the next few rallies and we nearly threw the championship away, but the wins in Ypres and Ulster improved the year and it has put us in a better position to fight for the title. We have to go and win both legs and we will do everything we can to win the championship. It’s going to be hard but anything can happen in rallying, especially on the Isle of Man.”

Matt Edwards has enjoyed a breakthrough year in the BRC. The Welshman has already secured two podiums and several other strong results in his first full season in a four-wheel-drive R5 car. Edwards and navigator Darren Garrod will need to win both legs on the Isle of Man with the other championship runners falling at the wayside. It’s a tall order, but stranger things have happened in a BRC championship showdown.

“I have good knowledge of the island and my confidence is high on Tarmac, as throughout the year I have been getting quicker and would love another podium or two on the Manx. Fredrik [Ahlin] and Keith [Cronin] have more control over their destiny as regards the championship, but I am going to do my own event and if the opportunity comes to sneak my first BRC win, I am going to take it.”

As well as the fight to be top dog, a host of other star drivers will be out to move up the championship leaderboard. Rhys Yates will return to the Isle of Man in his Ford Fiesta R5. Having already visited the rostrum once this season, the young gun will be eager to add another to his tally. Look out, too, for Alex Laffey (Fiesta R5), who will be chasing his first podium on his preferred sealed-surface.

William Creighton took everyone by storm on the opening round of the season, fighting for the lead on the gravel of the Borders despite having never driven on the loose surface before. Creighton eventually lost out to Oscar Solberg, but the young Northern Irishman broke his victory duck a round later as he won the Pirelli International. Two further podiums in Belgium and Wales were backed up by a home victory on the Ulster. A strong season for William has left him in the pound seat ahead of the finale.

“We did Rally Isle of Man for the first time last year, and it’s a great event to end the season and championship fight. We really didn’t expect to be in this position at the start, but after the Pirelli Rally we realised we could actually go for it. Callum [Devine] will be tough competition on the roads, but I will give it my best shot as winning the title would be amazing. I am going to treat it like any event, enjoy the week, give it my all and let the championship sort itself out.”

Callum Devine has enjoyed a ding-dong battle with Creighton all season and comes to the Manx event just 13 points adrift of his countryman. The nearly man on the Pirelli International Rally bounced back to take two wins mid-season in his Opel ADAM R2 and will provide a spectacular bout with Creighton for the title on the island’s roads.

“We came to do the BRC this year to try and win it. We have had a mixed season; two wins have put us in the title fight, and while a few retirements have taken things out of our hands, it’s all to play for this weekend. It all comes down to the Isle of Man, there are no more rounds after this. Everything matters now and I can’t wait to get into battle once again.”

Oscar Solberg left the first round as championship leader, after claiming a scorching win on the Border Counties Rally. A few retirements and mechanical failures pegged the Norwegian back in the middle part of the season, but a second place on the Ulster has re-fired his title aspirations. Solberg needs two wins and retirements from the other two to claim the prize – a tall order, but the Scandinavian is up for the challenge.

“I need to win on the Isle of Man and I will be going flat-out from the start. I think I can do it, and then we will have to see what everyone else does. William [Creighton] and Callum [Devine] will be quick, but I need to be quicker! The event looks really cool and I am looking forward to the competition – everyone will be going 110% to try and win the final rounds.”

As well as the championship contenders, the Junior BRC will be fraught with competition as Marty Gallagher and Meirion Evans – both in Peugeot 208 R2s – and James Williams (Ford Fiesta R2T) will hope to ruffle the feathers of the title protagonists. Josh Cornwell bagged the Cadet Cup with a round to spare and has elected to step up into a potent Peugeot 208 R2 on the island event to mix it with the Junior BRC runners.

Look out, too, for the rapid drivers in the Cadet Cup. With Champion Josh Cornwell graduating out of the class, Tom Williams, Nabila Tejpar and James McDiarmid will all be hunting their first category win. Alex Waterman has already tasted champagne this year and will do everything he can to finish runner-up to Cornwell in the series standings.

National Rally Cup Champion John Morrison was crowned last time out on the Ulster and will look to add the icing to his championship cake on the Isle of Man. BRC4 Champion David White will hope to follow suit, but will have to fend off series returnee, Downhill Mountain Bike World Champion Gee Atherton.

The stage is set…

The Isle of Man is well-known around the world as a motorsport mecca, with its fast-flowing roads home to the TT and its narrow lanes tailor-made for rallying. These famous lanes have helped springboard the World Rally Championship careers of the likes of Colin McRae, Richard Burns, Elfyn Evans and James Bond stuntman and Manxman Mark Higgins.

To join the elite club, crews must first face 160 miles of the island’s finest roads which are made up of countryside escapades, street fighting town centre tests and a spectacular side-by-side promenade course through the capital, Douglas.

All of this adds up to an exciting weekend of motor sport action, with a large crowd expected to line the stages. Highlights from the rally will be broadcast around the world via Channel 4, BT Sport and Motorsport TV network shortly afterwards. 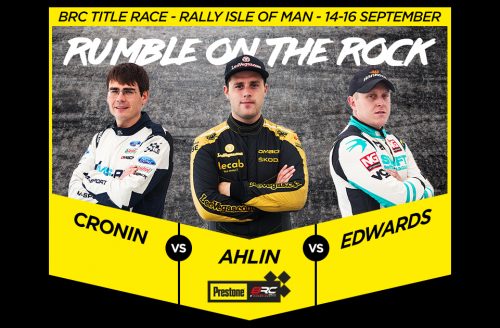