Robert Woodside will make his R5 debut on the Mid Wales Stages after putting a late sponsorship deal together. Woodside says he will tackle the first two rounds of the British Championship with more possibly on the cards. The last-minute agreement was finalised on Monday and has been made possible with the support of Kärcher UK and their Northern Ireland main dealer, Craigmore Online.

“We’ve been working on a deal since last year so I’m pleased it’s come together. I’m looking forward to getting back to the British Rally Championship as the last time I did a round was 2002. We’ve been targeting a comeback ever since it was announced last year that the Championship was returning. It’s a classic Championship that boasts proper WRC quality stages and rallies that I competed in in my youth.”

The R5 Fiesta will be prepped by Dom Buckley Motorsport with friend Allan Harryman staying on as co-driver. A brief test is planned at Sweetlamb on Thursday, and although Woodside admits there will be little time to tweak the Ford to his liking, he doesn’t feel it will pose much of a problem come the start of the gravel event.

“Dom Buckley has a wealth of experience – he operates such a strong team,” he said. “Alastair Fisher’s third-place finish on the Galway International Rally again proved that Dom can put a competitive package together. We’ll do whatever miles we can in the Fiesta and try and settle into it as quickly as we can. We won’t get the chance to do much with things like the set-up or the suspension, but I think the Ford’s a pretty adaptable car.” He added: “For now we’re only committed to Mid Wales and Circuit of Ireland rallies but I remain hopeful we can get a deal in place so we can do the whole championship. If not, we’ll just pick and choose our rallies.”

Woodside – now fully recovered from a hand injury that side-lined him for a number of months – made his return to the driving seat last weekend with a second place finish at the Circuit Park Zandvoort Rally in Holland. 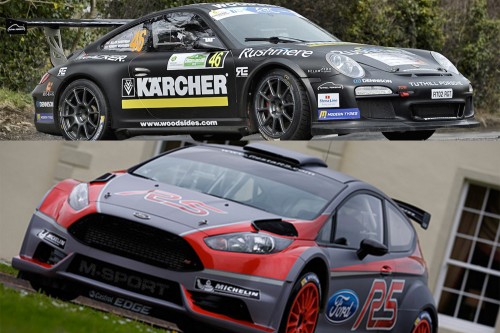